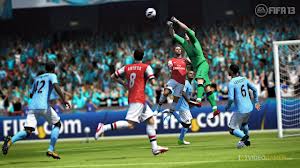 EA can thank its most valuable franchise, FIFA soccer, as well as its mobile division for a very solid year, according to its recently announced financial results for the December quarter.

To pull the important stats from the report (from Edge):

– FIFA 13 sold over 12 million units, up 23% on FIFA 12
– Battlefield 3 Premium generated over $108 million, and has 2.9 million subscribers
– The Simpsons: Tapped Out on iOS generated over $23 million in digital net revenue
– EA Mobile’s games and services (including handhelds) generated approximately $100 million
– EA’s Origin platform has 39 million registered users, including 17 million mobile users
– Dead Space 3 pre-orders are outpacing those of Dead Space 2
– Crysis 3 pre-orders are tracking 40% ahead of Crysis 2

These numbers compensate for the disappointing performance of the Medal of Honor franchise (which, with Medal of Honor: Warfighter, might spell the end of the franchise), and suggest that EA’s 2013 is shaping up well already with two upcoming games that can be expected to outperform their predecessors.

EA also had six games in the western market’s top 20 sellers for 2012, up from four the previous game.

EA’s had a rocky couple of years as it has been transitioning its business from that traditional reliance on the big blockbuster releases to more stable revenues from mobile and digital games. It’s now the number #1 publisher in mobile games, for instance, but that’s only because it’s made some big acquisitions such as Firemint (now Firemonkeys), Chillingo and Popcap. EA’s digital download platform, Origin, has struggled for years in a market dominated by Steam, but is now starting to generate significant numbers.

EA is not completely free of its need of blockbusters – FIFA alone is now an essential game in the EA portfolio, but there’s now something of a feather bed underneath for the publisher now.

Looking back at Demon’s Souls; is it better than Dark Souls?… yes