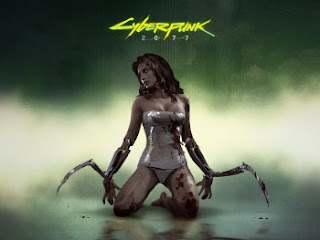 Last year a Hitman game was released with a trailer that was widely derided for a poor (read: offensive) portrayal of the women’s role in the games industry.

It was a fair call, too. The games industry is now the most important entertainment industry on the planet, and with that comes a responsibility to be part of the global culture. It’s no longer good enough to make games for male pubescents. Just as the film industry has learned that exploitation and sexploitation is generally a bad thing, we all hoped that that Hitman trailer would kick start a maturing of the games industry.

And then CD Projekt Red went and released this trailer for its upcoming game:

Notice the half-naked women positioned in a submissive position as a gang of masculine-looking figures unload a hailstorm of bullets on her? It’s hard to miss, that’s the entire trailer. No context (other than a token ‘this is cyberpunk and she’s a robot, so this is totally OK, boys’ in the accompanying press release), no characterisation. Nothing more than graituitous slow-motion grindhouse-style sexualised violence.

I can’t say I’m surprised with this trailer. CD Projekt Red proved with The Witcher games that it makes some incredible games, with a very juvenile understanding of sex. Women are invariably prizes or vampire-style enemies that are to be as feared as desired in they typical CD Projekt Red game, and this new game seems to be following that tradition in style.

It’s a pity, because CD Projekt Red games are incredible. The Witcher 2 is my favourite western-style RPG since the original Baldur’s Gate, as cringeworthy as its portrayal of women is. I have no doubt whatsoever that this game will also be incredible.

So why the heck do they feel like they need to prove the critics of the games industry right? At a time when people are looking for excuses to dismiss the games industry as a legitimate art form, why release a trailer that proves to them that this is still a boy’s industry tailored for people lacking social skills?

The description of the trailer, from Adam Badowski, CD Projekt Red studio head:

The teaser shows how the Psycho Squad might acquire a new member. The Psycho Squad specializes in combating “psychos” – individuals who overuse implants and substances that boost or otherwise alter the human body. There comes a point when they overdose on these innovations, and their bodies start to rebel against their biological body parts as well as against all things organic around them. Simply put, they start killing people, who they now derisively call “meatbags.”

When a psycho goes on the rampage, strange things can happen. There’s going to be a lot of carnage, so the psycho might be taken down by regular police, but they’re not always able to get the job done. When things spin out of control, they call in MAX-TAC (Maximum Force Tactical Division), popularly called the ‘Psycho Squad’. And these guys are exceptional; these guys are crack troops. The fact that they’re proud of that name tells you a bit about their mindset. They wear a badge with their official emblem on their right sleeve, but their left is reserved for their unofficial Psycho Squad emblem. It’s primitively made and the image itself is on the crude side of things. It’s not unlike a badge special force operators might make and wear to distinguish themselves from the ranks of grunts in any theater of war.

Comments for this story are now closed. Unfortunately my prediction was right and this topic was never going to generate a reasonable debate. My apologies to anyone who wanted to have a civil discussion on the topic.