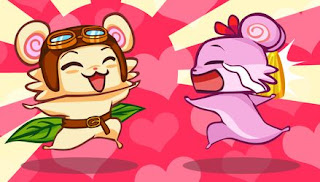 The Game Atelier has a habit of making incredibly addictive little games that are essential for anyone who likes fun.

Last year it brought Sun Flowers to the PlayStation Vita in a gorgeously HD port complete with trophy support. For a fiver it was easily the best value game on the Vita’s PSN store. Now it has competition because Flying Hamster is there.

Just like Sun Flowers Flying Hamster has been ported with a real eye for detail. There’s an interesting trophy list to hunt down and the super-cheerful visuals look spectacular on that great big OLED screen. It really really demonstrates that The Game Atelier is willing to go that extra mile for its games – it would have been so much easier just to take the Minis game and stick on the PlayStation Mobile download platform, but instead the developers have really worked to optimise the experience. 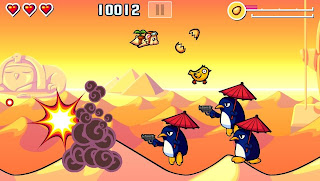 It plays nicely too. It’s all button controlled – more like the Minis version of the game than the iOS original games, and the analogue stick helps a great deal in The Flying Hamster as a side scrolling shooter. It’s more precise than a D-pad or touch screen and while The Flying Hamster is generous in terms of enemy size and so doesn’t need the most precise hand, the game’s controls help to minimise frustrating deaths.

The Hamster’s default weapon on his quest is his spit. That’s cute enough but scattered through the levels are a range of powerups. The only common thread between them is that they’re crazy and entertaining, but you’ll be picking up everything from beer to bananas and spitting them back out as weaponised destruction. The action gets surprisingly heated at times, and there’s a real thrill to dodging through the enemies to grab the choicest powerups. 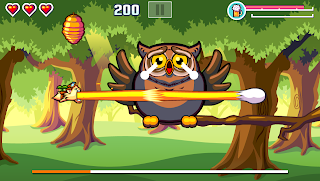 Much of the game is a process of memorisation, and players will need to replay some levels multiple times to get through them. The problem is that the Hamster can only take a couple of hits before it’s game over and so this game offers a surprisingly stuff challenge given its charm. It’s possible to earn credits which allow you to pick things up where you die, but naturally the real goal of the game is to complete it without dying. Completing the normal game mode also unlocks a hard mode, so there’s plenty of content in the game for your $5.

But the real reason you’ll keep coming back to this game is its charm. One moment you’ll be flying through a bar in the middle of a forest which is patroned by group of cats. There’s even one throwing up from too much alcohol nearby. The very next level you’ll be flying through a desert world where evil penguin overlords force their slaves to build pyramids. The game’s sense of humour is a little off-the-wall, but it’s varied and entertaining.

The Flying Hamster is very much old school in terms of its arcade appeal and the online leaderboard fits right in. The Game Atelier has done a great job bringing it to the Vita, and it is The Game Atelier’s finest game.

CD Projekt Red trailer: Yet another symptom of a sexist games industry