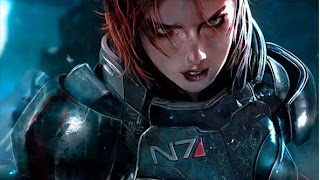 If you asked many gamers what attracts them to the hobby, you’ll often hear that it’s because games are ‘immersive’ or ‘interactive.’ And yet, if you look at the popular games in the industry, it is those traits – immersion and interactivity – that are deliberately suppressed by the major developers, and largely without complaint by the community.

Immersion and interactivity are two different terms, but in the context of games they are very closely related. The idea of immersion is a relatively simple one; it’s to have a deep mental engagement with an object. It’s a theory that extends well beyond games – when done well 3D is credited with improving immersion within a film, for instance. But it would seem on the surface that by giving a player direct control over an avatar in a game that games are the perfect fit for immersive experiences and that’s when the idea of interactivity kicks in. The more interactive an environment is, the deeper the player’s engagement with that game will be.

There’s a limit to how far a game’s developer can take immersion and interactivity, as it is not in a game’s interest to effect an Uncanny Valley response from the player (the theory that when real-world replicas look too real they effect revulsion amongst human observers). But the idea is that if a video game is a toy box, the toys inside should be many and varied and allow players to lose themselves within them.

So, when players talk about wanting to be immersed within they game, what they’re talking about is a desire for a rich, interactive experience within a digital space that is interesting enough to engage their cognitive thinking. Looking at the current state of the games industry, I would have to say that gamers are not that interested in immersive experiences at all, and the developers of popular games are even less interested in providing players with them. It would seem that there’s a mutual and unspoken agreement between developer and gamer: “we’ll build an illusion that our games are interactive an immersive, and you, the gamer, will play along.” That unspoken agreement is, to my way of thinking, holding the games industry back from breaking away from cinema and literature to become a distinctive and unique form of entertainment and art.

So let’s start with the problems I have with the idea of ‘interactivity’ within games, because the reality is that in the mainstream games industry interactivity is at best an illusion. Let’s take a look at Mass Effect 3 as an example. This is a game that is nominally an RPG – a genre famed for being highly engaging and interactive – and Mass Effect 3 is often lauded in the press because it has a dynamic plot that adjusts based on the player’s actions. Break the game down, though, and it actually does not. Inconsequential elements of the plot adjust based on whether you’re playing nice or naughty, honourable or sleazy. Players might even hit enough right responses that the avatar gets to get hot and sweaty with a non-player character.

But is this really interactivity? To me, this is no more evolved than a simple Choose-your-own-adventure gamebook, and is a spectacular failure when you consider the power of modern game platforms. From the first moment of Mass Effect 3, the game knows exactly how it will end, even if the player doesn’t. Without being able to change the destiny of the game in a meaningful way, how can we say a game is “interactive?” Having a plot dictated to us is not interactivity, it’s a linear progression, little different to watching a film or reading a book.

Some games, especially JRPGs, offer multiple endings depending on how well players perform. On the surface this seems to be enabling interactivity, but is it really? The answer is no. Once again, the game’s conclusion is pre-set, and the player just needs to hit the right triggers to make the right endings happen. That can be challenging and rewarding, but Choose-your-own-adventure game books are linear experiences. They have different endings, so there are essentially 4, 5, 10 different linear experiences within the one book, but the idea of interactivity and immersion breaks down as soon as the player loses the ability to carve his/ her own story within the game.

That brings us to the idea of open world games. After all, in a game like Skyrim or Assassin’s Creed 3, players are free to do their own thing between missions, and complete or ignore sub-quests as they see fit. A game like Skyrim is so large that it’s possible to be fulfilled as a player without even touching the linear main story (or, in fact, any of the linear sub-stories).

While the open world games are certainly more interactive in terms of plotting, in other ways these games are so limited in terms of interactivity that they again break down a genuine sense of immersion. Assassin’s Creed and the Grand Theft Auto games are, outside of a few key activities, barren interactive environments, little better than a model diorama. Yes, there are cars to drive in a Grand Theft Auto game, and yes you can gun down random people on the street. But you can’t interact with them in any way that isn’t violent. Yes, in Assassin’s Creed you can climb buildings, but you can’t enter most of them. When a developer limits what a player can do in the game world, then the developer is dictating the experience to the player, and is doing so at the expense of interactivity and consequently immersion.

Take that to the extreme and you end up with Goichi Suda’s parody of open world games in No More Heroes – an empty wasteland designed for little more than funnelling players towards the next objective, mission, or point of interest. This illusion of interactivity would seem to be enough for most players, given how popular the Grand Theft Auto and Assassin’s Creed series’ have been, but the question remains – have these games done enough to build a genuinely interactive experience? I would argue not.

Even Skyrim, which many hold up as the paragon of non-linear gaming, is deceptively linear in many ways. Players can pick which dungeons they want to tackle, and which storylines they’d like to follow, but each individual storyline is a linear tale, and each dungeon is a point-A-to-point-B trip. In practice and beneath that illusion of interactivity, Skyrim is a collection of short stories and following a trail of breadcrumbs that the developers have left the player. Breaking away from that formula leaves players largely in a rut, unable to do much other than wander around towns that are stuck in stasis until the player triggers a new plot.

I’m using these RPGs as examples because debunking the myth of interactivity and immersion becomes even easier when you look at high-profile games like Call of Duty, where there is almost no interactivity, let alone immersion. Like those duck-shooting sideshow games at a carnival a game like Call of Duty (and most of the FPS genre), is a shooting gallery repackaged with some Michael Bay-style cut scenes and a bit of artificial intelligence to make the game a little more challenging. Players are not involved in the world in any way that is not strictly on the game’s terms, or to put it in another way, from start to finish the players of a typical shooter game are playing the game in the way that the developers have told them to play it. It is in practice no different from a blockbuster film that, like a roller coaster ride, pulls players through a wild time.

None of this is to criticise any of these games. They are all wonderfully entertaining and rightfully lauded by the press and gaming community. However, these games are often lauded for the wrong reasons. Those games that are genuinely interactive and immersive are games that are, at best, games with niche appeal.

What does a game need to be genuinely interactive an immersive? I would argue that it firstly needs to give players control over the plot. By this, I don’t mean that a game should allow players a couple of decisions on the path to a predetermined destiny – as in Mass Effect 3. What I mean is that the players should have control over the creation of the story – a proactive control over the direction of the plot, rather than a reactive one.

The few games that have tried to do this have, to date, essentially had no plot. A game like Dear Esther asks players to draw their own meanings from what they see and experience. With no set objectives, players make their own objectives. With no non-player characters around, there’s no risk of players being directed somewhere to do something. Left to their own devices, players have no choice by to be immersed within the game because otherwise there is literally nothing to do in it.

Now, of course Dear Esther is a game that many players find deathly boring, and I am in no way suggesting that it is the way all games should be. Dear Esther is experimental and as immersive as it is, also fails to adequately represent the “immersion” that many gamers claim they want. There is one great example of a game that is non-linear, immersive, and interactive to its very core, while also being a commercial success, however.

That game is of course Minecraft. With no “story” players write their own. It’s an open world game, but unlike the blockbuster Assassin’s Creed and Grand Theft Auto games, Minecraft does not put rules on the players – if they see something in the game’s world, and they want to do something to it, they probably can.

Minecraft is the only example of a relatively mainstream title that is genuinely interactive and immersive. Given the power of consoles and PCs now, I must admit that I am somewhat disappointed that the big developers and publishers are so focused on making games that, while undeniably entertaining, fail to really push the boundaries of the games medium, and are merely repackaging cinematic experiences with a couple of choice marketing words on the press release.

Last Chance! Vote for your favourite games of the year!