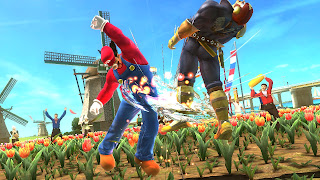 I’ve never quite ‘understood’ Tekken, so if you are a big fan of the series, please look away now.

Where I can understand the controls and structures of most fighting games, Tekken’s complexities have always felt a little alien to me. Where I can decimate opponents through a combo string in Dead or Alive 5 or even BlazBlue, I’ve always struggled to get the same fluidity out of Tekken’s combo system, and as such the series has never quite appealed to me in the same way.

Tekken Tag Tournament 2 on the Wii U hasn’t changed my opinion on the franchise in any way. In fact, it’s solidified it. There is a lot I simply do not enjoy about this game, and indeed after pouring enough time into the game I have come to the realisation that it’s just never going to click with me. I’ve since gone back to playing Dead or Alive 5, and I really do hope the Wii U gets a DoA 5 port, because in terms of hardware, it’s actually a good console for the fighting game genre. 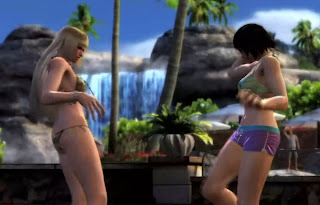 The first problem for me with this game crops up almost instantly – the character select screen. To put it brutally frankly, there are too many characters, and too few personalities. It’s a bloated roster with parents, brothers, and all kinds of other weird relationships going on. There’s multiple joke characters when one would have been enough.

There’s no sense of story or continuity amongst characters, either. While I can fully appreciate that the story is about the last thing that’s important to a fighter game, a sense of continuity is far more important, and by that I mean that the characters need to look like they at least belong to the same game. A boxing kangaroo paired with a half-American Indian, half-Asian looking woman is really stretching believability even by the standards of fighting games.

Tekken Tag Tournament 2 has then made me realise that I prefer my fighting games to have smaller rosters, with more care put into each individual character. To compare to Dead or Alive 5 again, each character in that franchise has a distinctive look and a fluidity of motion that is only possible by dedicating a lot of development time into each and every one of them. Tekken feels more like the arcade fighter with chunky character models and combos that string together nicely but a clunky movement system between them. On a purely mechanical level it works, but the characters have less genuine personality, and the action is less cinematic as a consequence. 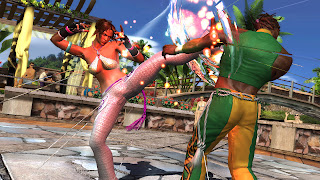 The costume system also contributes to a painful lack of personality in the game. At risk of drawing ridicule, the bikinis, bare-chested men, maid costumes and various other revealing costumes of Dead or Alive were a perfect humourous complement to the flowing dresses, the karate uniforms and more serious attire that players had access to. It allowed for a great deal of customisation and helped contribute to a game where I could have favourites (Bayman, Hitomi and Brad, BTW). My Wii U activity log says I’ve spent around 35 hours in the game, and I have a vague impression that I kind of like Asuka, and that’s about it. The Nintendo character costumes that are a bonus in this version of Tag Tournament 2 are a nice addition, but only as a novelty, and more groan-worthy silly than amusing.

In terms of the game itself, I also have an issue with the lack of a dedicated block button. Having come to grips with the excellent counter system of Dead or Alive 5, I find it hard to play any fighting game that lacks the ability to interrupt enemy combos. The cat-and-mouse strategy of Dead or Alive 5 was highly strategic. Tekken’s clearly got a deep combo system – wandering into the training mode shows some massive combos that I will never be able to pull off – but that’s the thing. The skill of Tekken comes with memorising and executing combos. It’s not ‘button mashing’ as fighting game people refer to it, but it’s being good at hitting buttons quickly and in sequential order that determines who is good at Tekken. On the other hand I have indeed won matches against players doing nothing but counters. Not a single combo, just good timing and understanding what my opponent is going to do. I love that style far more, since I suck at combos. 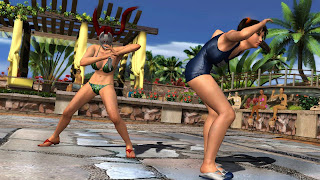 And that brings me to my main problem with Tekken Tag Tournament 2. I am not a fighting game aficionado. I enjoy them, but I lack the patience or the skill to master them. Without that commitment, Tekken is a frustrating game that lacks the kind of personality of its rivals. The score below is purely there as a guide for whether casual fighting game fans will enjoy this one. I suspect not.

Back to mopping the floor with Hitomi I go.

The best games of 2012: PlayStation Vita Game of the Year