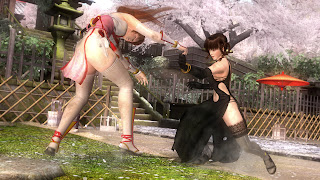 What happens when you take the casual fighting, jiggle-fest, that is Dead or Alive and turn into a more serious fighting game with a deeper combat system? Dead or Alive 5.

In a surprise move, this game dials back the sex a little to focus more on tight combat mechanics and a less forgiving counter system that makes the game one that will appeal far more to the more committed fans.

And yet, as a more casual fighting game fan, some of the spirit and personality of the Dead or Alive franchise has been compromised in the process. It’s still a great game, but its a whole lot more generic than the very distinctive Dead or Alive games of the past.

Or to put it another way: I don’t see this Team Ninja producing another Dead or Alive Beach Volleyball game. It seems they have more respect for the ability for this franchise to reach out to the “hardcore” fighting game fans than previously.