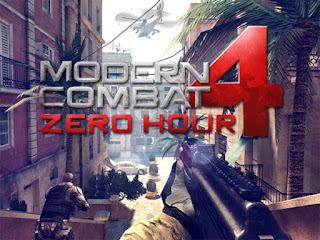 The top iOS shooter makes its yearly return – is it time to upgrade?
Gameloft is well-known for bringing similar type games that are on dedicated gaming consoles over to iOS devices and Modern Combat is one its best known series, seeing how it’s a near carbon copy of the Call of Duty titles yearly releases. Gameloft fills a void on the touchscreen devices and it has been very successful in doing so over the years. This year, Modern Combat 4: Zero Hour unsurprisingly brings a futuristic warzone that is not dissimilar to the one that is found in this year’s Call of Duty: Black Ops II, but that is not to say that this is not its best Modern Combat title in the series though, because that it is.
Dropping you right into a futuristic version of our world today, a crazed terrorist organization is out to kidnap the President of the United States, by utilizing a set of strategic explosions to ensure their success. A tug of war narrative finds us playing as an insensitive, foul-mouthed and bloodthirsty terrorist first, before taking up arms as the good guys to try and stop them once and for all. It is a smart way to make a standard run-off-the-mill storyline cohesive and interesting, as the narrative pulls back-and-forth upon itself; it is well implemented here and makes the lengthy single player campaign an enjoyable overall experience.
That is not to say that there are not a few hiccups along the way though. At times, there are severe difficulty balancing issues, especially when your objective is to keep an ally alive while he is performing a task. These moments find enemies rushing at you from all sides and missing a single one of them finds you retrying the sequence again. The frustration is then intensified when you are repeatedly forced to sit through a CG segment with each failed attempt – even if they are rendered quite well. It is also worth noting that these spikes are not just found on the higher difficulty settings, seeing how the normal difficulty setting is hampered with them as well. 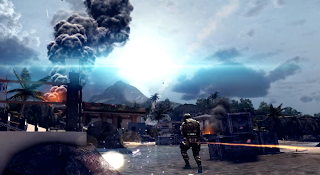 Controls are a different story altogether though. Gameloft allows you to manipulate the size/placement of all of the onscreen buttons and once you have got them set to your liking, you will be running and gunning like a pro in no time at all. They have brought gyro support into the mix too, which allows you to shift your device to fine-tune your aim. It is a novel idea, but one that is poorly implemented here. Instead of keeping it dormant until you initiate ADS (Aiming Down the Sights), like we saw perfectly executed in Uncharted: Golden Abyss on the PlayStation Vita, here it is always active and the slightest bump/shift of your device finds the screen bouncing around, meaning that this is basically a nonstop occurrence here. This issue could easily be resolved via a future update, which I hope that it will, because having the freedom to move the device itself to fine-tune your aim significantly improves the controls when the bullets need to start flying in a snap.
The visuals and sound are up there with the best of them and it is clear that Gameloft is truly becoming one of the premier mobile developers in the industry. Graphics are slick and polished, with particle and lighting effects being used very effectively to flesh out the game’s futuristic atmosphere. Even the character modelling and voice work is effective here, even if they are the weakest links on the presentation side of the package – making the entire experience “feel” like a home console experience.
Guns pack a lot of punch and the upbeat, rocking soundtrack really helps to pump up the game’s intensity in both the online and offline worlds. One thing to consider here is that Zero Hour really pushes these devices hard. My time with it was on The New iPad (4th Generation) and the game is optimized for the iPhone 5, so if you are playing on anything below these new devices, your experience will somewhat differ because of this. The framerate stayed high in my extensive time spent with the game for this review, with the only noticeable drops being rarely found in a few online matches. 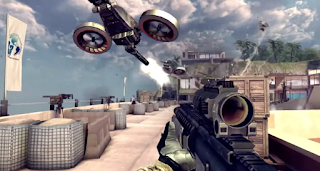 Speaking of “online,” this is where the heart of Zero Hour is found. The online action here is the best offered on the iOS Marketplace. Modes include: Battle (Free-for-All), Team Battle, Capture the Flag, Manhunt (Capture the Flag variation), Zone Control, VIP, Barebone (Hardcore) and Warfare (like Zone Control, but with zones having bonus effects) and all offer up a nice variety to keep things interesting for a long time to come. Matches connect quickly and basically, everything here is just as it is expected to be.
Character progression is handled by your gained experience doubling over as in-game currency of equalling value. All the guns, attachments and kill streak bonuses are available for purchase from the outset, yet you’ll have to play to gain the necessary funds to buy them. That is, unless you would rather use real money to buy the funds needed to purchase them instead. Thankfully, Gameloft has priced these unlocks in such a way that if one wants to purchase the best assault rifle available from the start, they’re going to shell out over $10 USD to get it. When acquiring the needed funds for said weapon will only take a few hours playtime for a moderately skilled player, the actual cash value needed to purchase the same in game weapon actually feels expensive. In my opinion, this is exactly how it should be and I hope other developers are taking notes.
There’s a tonne of things to spend your points on, ranging from equipment upgrades to icons/emblems. But there’s also specializations too. These are only unlocked upon reaching certain levels and they allow you to choose an upgrade path for your soldier. Want to be a Stealth soldier with quite footsteps and proximity mines? Or would you rather have a Support soldier with improved airstrike capabilities and extra explosives? These specialized paths allow players to develop their own unique ways to play and are a welcomed addition to the series. 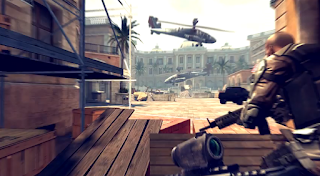 Map layouts and design clearly show that the developer put a lot of thought into the how the warfare would take place within them during the building process with sniping, close quarter and pressure points all being factored into them – making this the premier title for those looking to get an online FPS fix on their iOS devices. If you’re still playing Modern Combat 3:Fallen Nation, the time to upgrade is now.
Remember when I earlier stated: “Gameloft is truly becoming one of the premier mobile developers in the industry?” Well, I meant that and it is just here where I find an issue with Zero Hour. Gameloft’s developers are indeed becoming some of the best in the business and I feel that it is time they stop making carbon copies of other developers’ titles and start developing their own original games – even if the gameplay style remains similar. Why not feature a military shooter that’s set on Mars now that Curiosity is roving around up there, instead of keeping the “alien” atmosphere locked onto the N.O.V.A. series (Gameloft’s answer to Halo)? Zero Hour looks and feels so similar to Black Ops II’s futuristic world that it if you own a home console and Black Ops II, then there’s really no reason to play Zero Hour.
Gameloft’s Modern Combat 4: Zero Hour is a solidly built futuristic FPS shooter that brings the intense online action enjoyed by millions of gamers on home consoles over onto iOS devices. Even with its flaws, Zero Hour offers up a lengthy campaign that is worth fighting through, as well as a solid batch of multiplayer modes that will keep gamers busy for a very long time to come. It is just a shame that (once again) it feels so similar to the recent Call of Duty title that we just got finished playing through. Still, Zero Hour pack one heck of a punch and it is worthy of the funds needed to get in on the action.