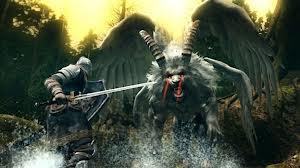 Earlier this month I wrote about my concerns with the announced Dark Souls 2. From the early reports and rumours, it would seem that my concerns are justified.

The first red flag is that the team making Dark Souls 2 is significantly larger than the team that made Dark Souls. “From Software has nearly doubled the internal team focused on world creation alone,” an Edge report claims.

On the surface this might sound like a good thing, right? More resources means a bigger, better game. The problem is that it also means a game that needs to sell more copies to even break even. The constant pressure on a game with those kinds of sales expectations is to find ways to sell to more people. In marketing speak that typically translates into “more accessible gameplay.” To gamers that means “compromised vision for $$$s.”

And given that there’s apparently vehicles in Dark Souls 2, there’s already a purity from the first game that is being compromised. Dark Souls did not need a chariot. Why does Dark Souls 2, if not to provide some “awesome” screenshots to feed the press or stick on the back of the box. Why are the developers talking about “improving the action of the game?” Part of the appeal of the combat of the Souls games in the past has been that the action is simple, but feels restrictive. This is not an action game series, and players are meant to feel like confrontation is a challenge, not something to be relished.

And lo and behold we have also got the new director of the Souls games, Tomohiro Shibuya, talking about making the game “accessible to players that haven’t picked up Dark Souls.” There seems to be some confusion on the meaning behind those words – and it would indeed seem like he’s simply pointing out that the goal is to make the game understandable to people who haven’t played the previous game. However Dark Souls has already found its way into the homes of anyone who is interested in difficult, dark, RPGs. The implication here is that From Software is chasing after an audience aside from the people that like difficult, dark, RPGs. They have to – they have got a bigger budget to exceed to break even after all – but what does this mean is going to happen to the game that Dark Souls fans fell in love with?

And I am saving the icing on the cake for the latest bit of news – Dark Souls 2 may well have paid DLC item storage. Yep, it looks like the realities of developing AAA-games have hit From Software’s pocket book.

(UPDATE: Good news. According to Siliconera, the initial report was misquoted, and that the DLC item storage thing is not going to happen. This is one less thing to worry about!)

The problem? Dark Souls, Demon’s Souls and the King’s Field games before those were never about compromise.