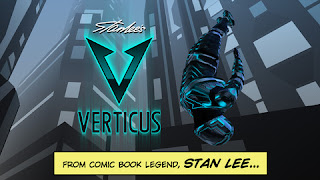 Stan Lee’s Verticus takes your iOS devices on a vertical adrenaline rush.
When Stan Lee creates a new character, there’s instantly a reason for interest. With the likes of the X-Men, Avengers and Spider-Man (among countless others) behind him, there’s no doubt that Stan Lee has what it takes to create awesome superheroes that captivate fans around the world. With Verticus, Lee hopes to take the mobile gaming industry by storm with a freefalling superhero that’s willing to face certain doom to save the world. Does Verticus have what it takes to be the next big superhero around?
In comic book storyboard style, with narration by Stan Lee himself, we find that a nefarious alien race known as The Obliterators is deep inside Earth’s core, implementing a horrific doomsday device to destroy all of mankind, the Cosmic Fuse. Our superhero, Verticus, is falling from the sky and it’s our job to navigate him down into Earth’s core, fend off The Obliterators and steal the Cosmic Fuse away back into space for a safe detonation. In other words, you’re going for a rocket fuelled adrenaline rush straight through Earth and out the other side. 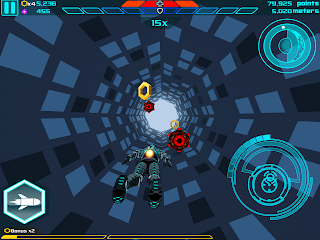 Verticus himself is an iron clad superhero that’s quite similar to another of Lee’s famous characters in appearance – Iron Man. His standard black armour is accented with cool neon turquoise glows in numerous areas, giving him an almost alien appearance about him. A small rocket pack on the back of his armour gives him extra agility, it’s obviously he was designed to fly…err, make that fall with style. His arms and legs move accordingly as he falls and the faster he screams into the Earth’s core, the tighter he streamlines his body. Needless to say, he’s a cool looking superhero and one that I hope to see replicated at upcoming cosplay conventions in the future.
If you’ve played Dejobaan Games’ AaaaaAAaaaAAAaaAAAAaAAAAA!!! – A Reckless Disregard for Gravity, then you’ll have an idea of what the gameplay is kind of like here. Basically, you’re falling straight down into the screen, but instead of controlling your flight path like in Dejobaan’s title, here it’s pre-set for you. Instead, you’ll navigate the many obstacles, mines, lasers and numerous other death devices that are out to stop you from saving mankind via an extremely responsive floating virtual control stick.  With the beautiful visuals and blazing fast gameplay, the immersion levels are sky high and I had to make myself remember that I actually needed to blink a few times here and there while playing it.
What’s interesting about Verticus’ gameplay is that it evolves the more you play it. Your first flight won’t last long, as you only have a few hit points and no weapons/armour. Throughout your flights though, you’ll collect gold coins and purple orbs. Orbs are used to refill additional armour slots after they’re purchased and to continue runs once you’ve met your match. Coins are used to purchase upgrades to your armour, buy an extremely effective missile launcher to blast mines and enemies out of your way and you can even upgrade the effectiveness of your upgrades. These in turn allow you to progress further into the Earth’s core and before long find yourself standing face-to-face with The Obliterator. Hopefully, moments later be screaming like a bat out of Hell with the Cosmic Fuse in hand out the other side of the Earth, before going right back in for more. Once you do make that second dive though, you better be prepared. It’s a difficult journey the first time through, but each successive dive gets substantially more difficult. The longer the dives, the more coins you’ll collect for new upgrades and if you collect enough of them there’s even additional suites of armour up for grabs to ensure that keep on flying in style. 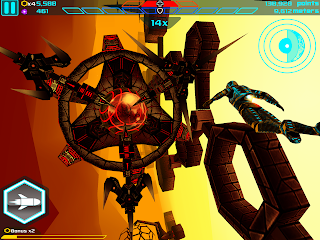 The only real issue here is that upgrading is at times overly expensive and coin collection can be tedious work; I paid the additional $0.99 to double my coin collection rate within an hour of starting the game for review. I enjoy working for my upgrades in games, but it almost feels like it was intentionally implemented in such a way to force gamers to shell out the little extra from players. Even though the price to purchase and upgrade is indeed still worth its asking price, it always feels a bit shady when developers do this kind of thing and sadly it’s becoming a norm for the mobile gaming industry. I’d much rather pay the extra dollar upfront and not have to deal with this any more going forward.
Stan Lee’s Verticus will likely never be a part of the X-Men or Avengers, but that doesn’t mean that he isn’t a cool new superhero though. With looks to kill and a great new approach to saving the Earth, he’s definitely another great character in Lee’s long list of heroes. Bringing his adrenaline rush of a mobile title to iOS devices around the world, Verticus just begs for you take a dive – you’ll be glad you did.
– Christopher Ingram

The Weekly Discussion: Playing (as) Favourites