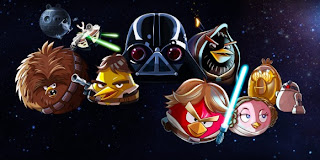 Not much has changed with the Angry Birds franchise since it was released back in 2009.

It’s still the same game in various different skins; launch birds to attack structures that a nasty group of pigs have hidden themselves within. Yet, Angry Birds is still able to hold its own, creating one of the most addictive set of games available on the iOS store.

This time, the birds have flown into a galaxy far, far, away. The inclusion of Star Wars may seem like an odd choice to many. But it’s not without charm. The little cutscenes that establish scenarios are cute, and will please those who are both familiar and unfamiliar to either series. 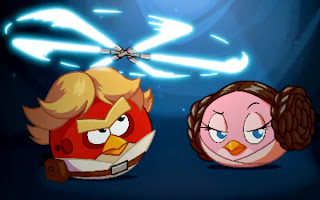 The game covers the original trilogy, with currently A New Hope (labelled Tatooine and Death Star) and Path of the Jedi (which is set in Dagobah) ready to play. I wasn’t happy with the fact that after buying Angry Birds Star Wars, I would have to fork out double the cash to unlock the Path of the Jedi levels, especially considering how the level pack entitled Hoth is coming soon in a free update.

But I digress. Each of the original birds have been dropped straight into the rebel alliance, and all have their own unique Star Wars abilities. The Red Bird, now Luke Skywalker will swing his lightsabre with a tap of the screen. Obi-Wan Kenobi is portrayed by the Black Bird, as has the ability to force push. The Yellow Bird is Han Solo, with his trusty laser while his partner in crime, Chewbacca, is the Big Red Bird. All the new powers add an interesting element to the gameplay, which should hook back in some players who had grown tired of the basic formula.

The mighty Eagle, now the Millennium Falcon, is a great way to bypass a difficult level. The game gives you some Falcons when you reach a certain number of stars, and also allows you to buy extra if you so please. But all levels are able to be beaten without the use of one, so they really are just a “get out of jail free” card. 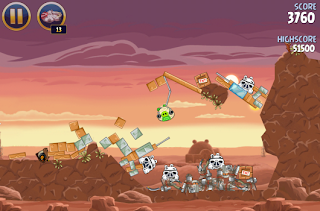 What’s really good about Angry Birds Star Wars is how it blends both the magic of the original Angry Birds with the latest non-crossover game Angry Birds Space. The levels are switched up within the packs. For example, in the Death Star, you begin outside in space, before moving inside to land levels, and then finally to space for the famous trench run. The switch-up is a nice addition to the series, even if it is adding nothing that we haven’t seen before.

The way that Angry Birds and Star Wars works together is great. Fans of Star Wars will fall in love with the loyal use of sound effects. Lightsabres, lasers, the token title music, it’s all there. But in the end, that’s pretty much it. It’s still Angry Birds and it’s still a great game. I did not find that I struggled to complete the levels in the game, but unless you’re a veteran of the series, you will definitely be coming back to get all three stars on the levels. If you’re a big fan of Angry Birds, you know what you’re paying for. If you’re a fan of Star Wars, you will love the references they make. Either way, you’re set to have a blast.