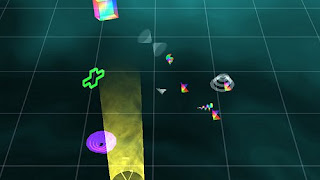 Sixty Second Shooter is a perfect example of what is so great about the PlayStation Mobile games. Small, pick up and play titles that offer long-lasting enjoyment.

Sixty Second Shooter is a mash-up between Geometry Wars and a stop watch. You have sixty seconds, hence the title, to get as many points as you can, gaining points by chaining kills as well as collecting tokens that work towards unlocking further levels.

The controls are really responsive, and easy to learn as well. Much like your standard dual stick shooter, the left stick controls your movement whilst the right stick is how you fire. You can also shoot missiles with the R button. 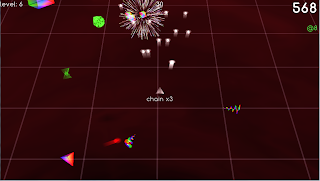 There are a multitude of power-ups that you unlock. Having two guns fire at once, a bomb that destroys anything in its large spread, and the ability to slow down time. All these power ups only last for a short period of time, but using them well is a great boon in the struggle of beating your score.

Overall, there are ten levels that can be accessed within the sixty second time limit. When you first start the game, you can only progress down a few levels, but as you collect more tokens then you will eventually unlock level 10, the lowest possible level to access.

On the lower levels, you’ll find more enemies, which can be chained together with kills to earn more points. What makes the point chasing so fun is that near the end of the unlocks you are able to start at level 5, meaning you spend less time moving down to level 10, allowing for longer time to earn more points. 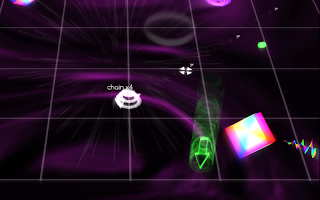 Although the each second is only sixty seconds long, if you get hit, or touch an enemies, that’s game over for you. This could have been a recipe for disaster, but it works because within two taps of the touchscreen you’re back into the game. It’s fast paced from the menus to the gameplay, perfect if you have a few minutes to kill.

Sixty Second Shooter Deluxe is a fun game. The fast nature of it makes it easy to fall into the “one more go” mindset. It’s perfect if you want to pass the time on the train, or if you want to sit down for a solid hour trying to beat your high score.