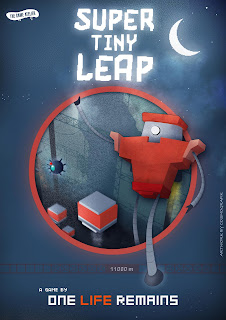 Another endless jumper emerges – is it worth giving a look?
The Game Atelier is better known for their colourful and cute games (Flying Hamster and Sun Flowers), but this go around they’ve taken on the role of publisher and brought us One Life Remains’ little endless jumper, Super Tiny Leap. Featuring a great retro art style and tunes, mixed with a simple, yet challenging gameplay approach, this endless jumper is worth taking a leap on.
When hearing the words “app” combined with “endless,” many folks start to get leery before even taking a look at what’s on offer – that’s sadly become the nature of many people these days, because of the oversaturation on the app markets. But every now and again, a title has a just that little something that makes it worth giving a shot – Super Tiny Leap lands here.
Our little pixelated robot wants to jump, but he can’t jump on thin air. So, with a simple tap of the finger, you can (magically) place boxes in thin air for him to leap ever higher upon. Of course, there wouldn’t be much of a challenge if explosives weren’t scattered about to dodge, so they make their appearance in increasing numbers the higher you climb. But it’s the white numbered boxes that need to be grabbed that are the “something” that makes the difference here, because these boxes increase the amount of  (red) boxes you can place for your robot to leap upon. With him automatically jumping from left to right – only changing directions when bouncing off the side walls – you’ll have to quickly, but precisely navigate his jumping/falling around the explosives to climb higher, while making sure you don’t run out of boxes at the same time. It’s usually a short-lived experience that’s frantic and fun, and one that’s perfectly fitting on a mobile device. 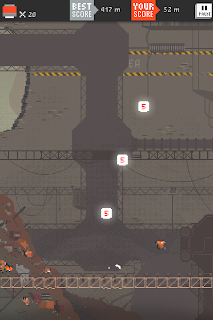 While the initial Super Tiny Leap download is free of charge, it only allows access to the Basic mode that I described above and limits the gameplay to 10 plays per day. For many, I could see this being enough to satiate their needs, but if your still wanting a little bit more to leap at, a $0.99 USD fee will unlock the Binary and Xtrem modes, and remove the gameplay limits entirely. Binary mode puts not one, but two robots into play, which brings the game’s anxiety levels to new heights and Xtrem mode significantly increases the amount of explosives that need to be avoided. Both of the additional modes come with an unlimited amount of boxes that can be placed, keeping your eye on the sky, instead of how many boxes you have left – bringing a nice touch of diversity to the game.
As with all titles of the ilk, online leaderboards keep you coming back for more and Super Tiny Leap is no different, with three separate Game Center leaderboards to claim your bragging rights upon. This also means that, by its nature, it’s a repetitive title that’s best taken in infrequent play sessions. That’s not to say that you won’t waste an hour here and there away though, because I sure did and it isn’t coming off my iPhone anytime soon.
Super Tiny Leap is a small package that packs a lot of fun when taken in small bits. Landing more in the ‘having fun while wasting time away’ sector of gaming than full-fledged gameplay, this is something that’s perfectly acceptable in the mobile gaming world and One Life Remains literally leapt all over it. You know what? You should leap all over the free version of Super Tiny Leap and if you enjoy it, show your support with a $0.99 USD upgrade.
– Christopher I

The last thing we need next gen is better graphics