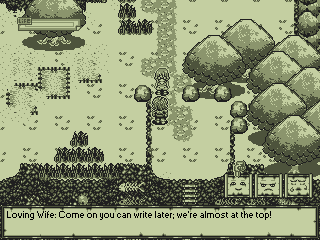 Digitally Downloaded recently scored the chance to talk to the guys bringing the multi-platform title Two Brothers to a range of platforms, from iOS to Wii U. Two Brothers has been inspired by retro 8-bit RPGs and the golden Game Boy era of gaming; games such as The Legend of Zelda.

Starting as a Kickstarter project reaching $US16,257 out of its goal of $US6,000, the game puts you in the role of Roy Guarder, a young inventor who begins a fixated search on finding new colour for the monochrome Earth he exists in, after experiencing a near-death situation.

Roy’s brother, also an inventor, joins him on this quest and so the adventure begins. With a beautiful retro-age art-style combined with eye-popping HD visuals, Two Brothers has managed to conceive itself a very individual look for modern games – and having to wait until February 2013 for this game to be released is proving agonising for us all.

Given its heritage, this is a game perhaps best suited for the Wii U platform. Digitally Downloaded’s Farida recently had the opportunity to sit down with AckkStudios’ Brian Allanson to discuss the opportunities for the game on Nintendo’s newest console.

Digitally Downloaded (DD): To start us off, could you tell us a little about AckkStudios?
Brian Allanson (BA): AckkStudios began in March 2010. Its team members consist of myself, Ian Bailey, Tyler Steele, Andrew Allanson, Jose Alfaro, and Anthony Manfredonia.

DD: Two Brothers notably started life as a project on Kickstarter, and it was a highly successful one. Is there anything in particular that convinced you to bring the game on to the Wii U, apart from the transition being in popular demand?
BA: Developing a game for a Nintendo console is something I’ve always wanted to do. So, as soon as I found out it was a possibility, I jumped for the opportunity. There was no moment that really decided it… it was always just a matter of having the green light.

DD: Two Brothers has been said to have been inspired by retro 8-bit RPGs and the GameBoy era of gaming, similar to games like the Secret of Mana and The Legend of Zelda. Considering this, what made you choose the Wii U as one of the platforms for development, rather than, say, the 3DS?
BA: We chose the Wii U over the 3DS mainly due to technical reasons… it was easier to port our code to the Wii U, than it would have been to the 3DS. To make Two Brothers on the 3DS, we would have to start from the ground up with the code.

DD: If at all, how do you plan on utilising the GamePad and Wii U’s technology in general with such a game and its aesthetics?
BA: We have a few ideas… nothing I want to announce at this time. [wink]

DD: Combining a retro-era art style while making full use of modern graphical capabilities to enhance it seems to be quite an unusual yet fascinating concept. How did you come up with the idea for such a distinctive look for Two Brothers?
BA: The art for Two Brothers was inspired by a trend of game “demakes” from a few years back… people were realizing the visuals of modern games with the colour pallet of the Gameboy. I really loved the look, so I started drawing art in that colour pallet, and before I knew it, I had quite a bit of game graphics that looked “Game Boyish.” Not so much what the Game Boy actually looked like, but more what someone who hasn’t played a Game Boy in years, would remember the graphics of the Game Boy looking like. That’s of the inspiration behind Two Brothers – how modern concepts and technology distort memories of past games so it becomes more about what you remember them being like.

DD: Do you believe that the retro age of gaming still has a prominent role in modern gaming?
BA: People still play retro games, and people play games that look retro. In Two Brothers, we’re not really trying to play to people’s childhood memories, in the sense where we want them to like it because it reminds them of something they used to play as a kid… but rather, we want to make a game that we would have made as children playing Game Boys, had we had the know-how back then. We’re making the game because we would love to play something like this… and it’s a bonus if people like it!

DD: We’ve also heard of the unnamed modern 3D RPG that you have announced to be in development. Given how exciting new games are to us all, might you be able to give us a little more information on this?
BA: It’s a lot like Earthbound… it’s 3D… it’s an RPG, and it’s targeted at the Wii U! Oh, and it’s very colourful. The complete opposite of Two Brothers.