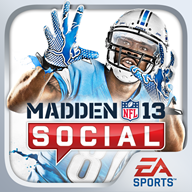 Madden goes free to play and focuses on quick play action for fans on the go.

Focusing on ‘offensive shootouts’, play calling, and a pick up and play experience, this is a Madden that’s a little less about heavy detail and more about just having a little pigskin fun on the go.

Madden NFL 13 Social is a game for all skill levels, providing straightforward play calling for the master strategist and on-field action for those who want direct control of their team. The game combines elements of the fan-favorite Madden Ultimate Team with unique mobile gameplay to create a brand-new experience. Fans can open card packs, set their lineups and buy and sell cards in the auction house to assemble an unbeatable roster. Every offensive drive earns coins, allowing fans to jump into the shop and buy new card packs, further improving their squad.

Also pretty cool here is that Madden Social can be played asynchronously. Basically that means that you can start a game on your iPad, play a bit online through Facebook, and then finish up on your iPhone if you wish.

And although the gameplay isn’t real time like the console and handheld versions of the game, the actual ‘Madden simulation engine’ is the heart and soul of Madden Social. So when you call a play it’ll play out exactly as though you called it in your copy of Madden 13 on the Xbox or PS3.

Social is pretty simple to play too as the Facebook version has you calling plays and the iOS edition, while largely the same, also allows for you to get down onto the field with some swiping and tapping. As I said, it’s simple stuff, but that’s what your looking for in a game like this.

Madden Social is available now for the iPad, iPhone, and Facebook from EA- and is free to play.