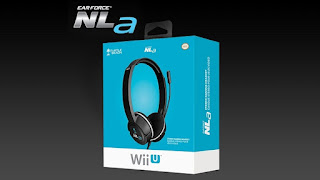 Recently, via an article published on Kotaku, it was alleged that gamers would need to buy headsets for their Wii U if they were set on utilising voice-chat while gaming online with others.

This is despite the fact that the GamePad has its own built-in microphone ready to rumble right from the get-go. While this will not necessarily affect other social aspects of the Wii U‘s online system, this sparked an unsurprising outrage from many gamers. Despite the fact that no official statement came from Nintendo directly, and that we know next to nothing of how Nintendo fully plans to integrate online into its new system, quite few have even gone to the extent of saying this mere fiasco has already deemed the Wii U‘s online network, and I quote, “incompetent“ and “shady.”

But hold on right about there. Having thought a little deeper into the matter than many would care to as of now, maybe… just maybe… this decision on Nintendo‘s part might be for the better?
Firstly, a huge modern day phenomenon that will prove familiar to any online gamer of this generation will be, well, what we like to colloquially label “elitist” and “trolls.” You know, those immature, irritating creatures (adults and youngsters alike) who just hurl obscenities, offensive phrases and nonsensical chatter all over the place while participating in an online game? Those are the kinds of widespread characters anyone would love to have restricted from having a voice while playing with others online, especially when it comes to Nintendo itself.

An integral characteristic of the company it is oft mocked for is how it takes drastic measures to keep its online systems child-friendly, and what with a major part of Nintendo‘s existing consumer base being children and family gamers, who could really blame it? However, with the Wii U‘s intention of stepping up to the hardcore fanbase in terms of general appeal, Nintendo will need to completely overhaul its online system to become more accommodating to core gamers, especially teens and adults. Now, while this may be so, Nintendo obviously still realises it does have the more casual children and families to cater to as well, maintaining an expansive yet safer experience for gamers of all ages, and forcing gamers to buy a headset to utilise in-game voice-chat may be one way of doing just that.

Basically, the bottom line is this: if you‘re not serious enough about using voice-chat while gaming, then you‘re not going to be swayed to shell out the extra dosh for a mandatory headset just to muck about. If everybody who owned a Wii U could just start setting up shop and using in-game voice-chat while playing online, chances are you‘re going to encounter plenty of very unpleasant strangers to ruin your experience from day one. Even with headsets as the only option available for most consoles this gen, you still tend to meet a lot of nuisances in online adventures nowadays.

Essentially, with Nintendo forcing gamers to buy a headset for in-game voice-chat for the Wii U, it‘s inconspicuously improving the quality and security of the experience for everyone. There are enough immature gamers out there with headsets available to wreak mighty havoc; imagine having a lot more people yelling into the GamePad microphone and causing a headache-inducing disaster. It would be just like the ill-fated Wii Speak situation all over again – except this time, everyone would have one and you would not be able to just simply ignore it. By getting gamers to buy headsets, Nintendo are giving us an experience of optimum audible quality and raising expectations to engage in some actual decent voice-chat in games for prospective Wii U owners. As I said before, there are enough immature people with headsets as it is – let’s not let every 12-year-old Call of Duty player out there be able to take advantage with the Wii U.

Secondly, another good thing that could amount from this supposed blunder on Nintendo’s part is more from a business perspective, yet it could also beneficially influence consumers too. Want the blunt truth? Nobody wants to have to be tied down with a wired headset in this era of wireless connectivity – heck, even the Wii U’s controllers are wireless! Having to have your headset plugged into the GamePad at all times, even when using a Pro Controller alone, could prove to be an awkward, cluttered mess. While one wireless Wii U-compatible headset has been confirmed to be on the retail market and has been getting rave hands-on impressions, it’s a top-range headset retailing for a price of $89.95 (ouch) and is currently the only available wireless option for the Wii U.

So consequently, we as consumers will demand for cheaper wireless options to be available on the market – right? Well, I think our demands won‘t be in vain, as other third-party consumer electronics manufacturers will lunge at the opportunity to satisfy our demands. Why? Because it‘s a guaranteed business opportunity that goes three ways!

As I said, when the Wii U launches, loads of gamers are going to want to take advantage of in-game voice-chat with the Wii U conveniently and cost-efficiently, and neither a wired headset nor a premium $90 headset solves this problem for us. Naturally, gamers are going to want cheaper, wireless headsets and this is where companies of adequate expertise come in. Essentially, Nintendo has created a massive sales opportunity for other parts of the electronics market to step in; a lot of companies are going to be willing to fulfil and cater to the demands of consumers on the Wii U in a 100 per cent guarantee that they‘ll be patronised – that means creating cheaper, wireless Wii U-compatible headsets for us.

It‘s a win-win situation all-round; Nintendo is endorsing other areas of the consumer electronics market while in turn is getting support and product advertising for its system and we, the consumers, are getting what we need. I bet you, if all this really is true, we‘ll be seeing a range of quality $30 Wii U-compatible headsets available within a month. It‘s a problem solved within itself.

So, what do you make of this entire matter? Do you think Nintendo‘s actually managed to get something good out of this whole issue, gaming and market-wise?

Innovative games we’d like to see on Wii U: Part 2

Vice City celebrates a decade, comes to iOS and Android