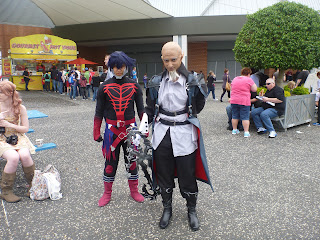 We tend to see a lot of negative press about the gaming community. From the controversy over sexism in the fighting game community, to other accusations of sexism towards female games journalists at the E3 2012 convention, and of course the persistent issue of the behaviour of the community of games like Call of Duty, the overall picture is one of a closeted community of often unpleasant people and intensely unwelcoming of “outsiders” to the fold.

So after attending my first major gaming convention – Australia’s second EB World Expo – I think it bears mentioning that the picture that many have of the gaming community is anything but accurate. That or somehow Australian gamers are the polar opposite of those in the rest of the world.

This was a convention of some 20,000+ people, spread over three days, playing just about every single game that is due for release in the coming months. In the crowded and noisy auditorium I saw nothing but a bright, vibrant, happy and diverse community of gamers. It was refreshing to be reminded that the unpleasantness that happens online is merely an extension of the Penny Arcade philosophy of anonymity + audience.

Girls wandered around in various cosplay costumes (Juliet Starling is the new Lara Croft, it would seem) without any harassment that I noticed. And they were actively involved in a lot of what the event had to offer, whether it was the casual games (like a giant Just Dance 4 display), or the more hardcore stuff. At one point I was standing behind a Juliet waiting in line for a go at Injustice. This is a stark contrast to the reputation that these events have for catering to an exclusively male audience. 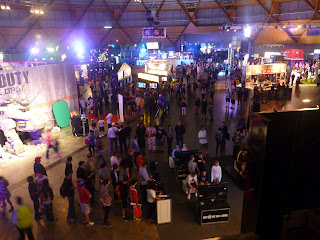 Further to this, with very few exceptions, there was not a booth babe in sight. Australians tend to look down on such marketing gimmicks, so they’re less common here than, say, Tokyo Game Show, but it was refreshing to see that the organisers and stall owners understood that in the spirit of inclusiveness booth babes do add an unpleasant and immature flavour to an event.

Even more encouraging was the way the gamers all behaved. There were numerous stands that weren’t really monitored by floor staff. For instance, the Tekken Tag stand was a free-for-all, with no one pushing the gamers on who decided to stay there for extended periods of time. Given the reputation the fighting game community has, I fully expected to wait for a long time to get a go myself. But I didn’t have to wait long at all. Standing behind two clearly serious fighting game fans, one immediately offered me the controller when he saw me waiting behind him. His friend stayed on to hand my backside to me for the first two rounds, then deliberately let me win the next two before slaughtering me in the final round. He then handed the controller to my partner and the two of them waited behind us so we could have a turn.

I don’t know if this is the etiquette of serious fighting game fans, but given they could have got away with not moving at all, it was a perfect example of the sense of community that the event offered.

Further to that people were happy to wait patiently in line for the more popular games (including the two-hour waits for games like Call of Duty), and not once did I see an attempt to queue jump. 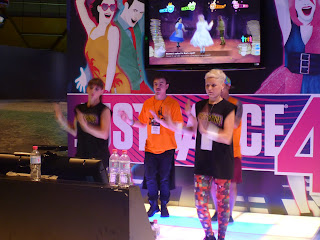 The cosplay competitions were well supported with a great sense of fun, and even the competitive gaming section of the arena was nowhere near as unwelcoming as I might have expected from the reputation of games conferences.

The only real negative impression from the event that I absolutely must bring up is the complete disregard for the age ratings of some games. In Australia we have an age category “MA 15+” – this is a category that means that gamers under the age of 15 should not have access to the content at all. At one stage at the Metal Gear Rising booth there was not a single person over the age of 15 playing the game. Each session of the main arena was age restricted, and yet there was a 12-year old videotaping the video demo of Far Cry 3, naked breast sex scene and extreme violence and all.

I don’t blame the organisers for this – the content was always clearly marked MA 15+. However, the stall managers should have made sure they were not allowing underage people to play the games, and the parents of the kids really should have been behaving far more responsibly.

Given Australia just passed a law to finally bring the country up to speed with the rest of the world and allow R (18+) games, I now fear that the Australian gaming community may not be responsible enough for actual R18 ratings for games.

But overall I must say this – the gaming community online might often be quite unpleasant, but in real life, conventions like the EB Games World Expo show that there are a lot of people that really do come together to share a love for games with style.