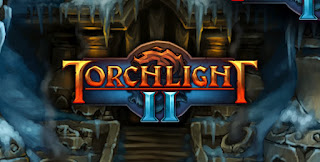 Let’s get this out of the way first: no, I have no idea whether or not Torchlight II is better than Diablo 3. Not only did I not play Diablo 3, but there are hundreds of people more qualified to make comparisons about the mechanics, structure and overall feel of both games than myself. If you are interested in this argument, then Game Front has a concise comparison article on the entire matter which can be found here. But enough of that, let’s get onto today’s discussion — shall we?

Torchlight II is a randomly-generated, dungeon-crawling action role-playing game (ARPG) and it also happens to have a fantasy setting. The story involves a big, bad wizard that settles in three locations: a forest, a desert and a swamp, before (spoiler alert) being defeated by the hero. Breaking the mold isn’t Torchlight II’s objective, but that doesn’t matter. It succeeds because it’s the purest form of a dungeon-crawling ARPG covered in a sugar-coated layer of style, refinement and loot. 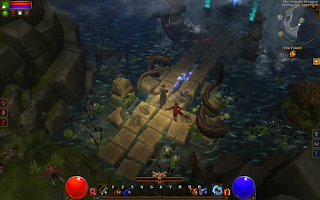 By “purest form,” I mean the purest of pure forms. The five pillars of the action role-playing genre are (arguably) the only aspects holding Torchlight II together. But those aspects are so well-crafted that the game can purely base itself off of them alone and still be massively enjoyable. For those unaware, here is the pocket-list of the five pillars of the ARPG genre: Questing, Killing Enemies, Looting, Level Grinding and Randomly Generated Content.

Firstly, levelling in Torchlight II is a rewarding experience. Not only do the base statistics of a player’s character increase, making higher-level enemies a little bit easier to tackle, but levelling up gains two types of points: skill and ability. As their names imply, skill points increase the character’s skills (attack damage, defence points, magic damage, etc.), while ability points increase the abilities/magic spells the character can use in combat. While this is similar to every other ARPG, what makes Torchlight II different is that the player character is almost always gaining new levels. I cannot think of a single hour that went by without my character gaining a level or two. Also, the level up sound and narrator tingle my eardrums with a giggly feeling whenever they occur in unison, which is what happens each and every time. However, I’ll admit that I do take some concern in how every ability tree for each character limits the majority of abilities to somewhat high level-restrictions (the highest level restriction I saw was level 42), but given the level-happy nature of the game, I didn’t find this to be too much of a concern.
Quests in Torchlight II are surprisingly small in quantity compared to its brethren, but each quest in the game is unique in the sense that the player will always be travelling somewhere new, or performing a variation to the usual kill-everything-that-breathes [skeletons breathe? – Ed] basis. In one early mission my character was tasked with entering the land of the dead and defeating the ghost of a pirate king. Later, I was tasked with escorting an NPC through a dangerous desert and believe it or not, both of these were sidequests. I have yet to find any type of sidequest that involves fetching random item drops for a clueless NPC or defeating an arbitrary number of a specific enemy to prove my worth to an emotionless piece of coding stuck to a 3D model. Complementing these fun, non-generic quest is the colourful visuals found within the many randomly generated dungeons found inside Torchlight II. 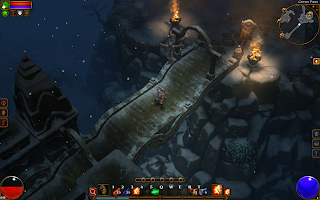 The combat is the most distinctive aspect of Torchlight II in comparison to other games in its genre. Torchlight II follows the tried-and-true controls of clicking on enemies to attempt to murder them and using hotkeys when the situation requires more than clicking to stay alive. Upon being defeated, enemies will either drop valuable loot, or explode into a bloody mess, which is quite satisfying, even if there’s no real substantial gain for the kill. But, what makes Torchlight II recognizable from the pack is that it uses what it calls a charge bar. This charge bar gives the player bonuses based on how offensive the player is, with the most common bonuses being slightly increased attack and damage-blocking stats. While my main Outlander character didn’t receive any unique bonuses from the charge bar, the other three classes use this feature well and it can actually change the play-styles of characters and players alike.

To say Torchlight II is generous with loot would be an atrocious understatement. It’s supercharged when it comes to loot, with every sixth enemy dropping some sort of it, whether it be coins, potions, weapons, or pieces of armour. Not only that, but guaranteed sources of loot such as chests, champion monsters and captured civilians can be found throughout the areas and dungeons as well.  It’s almost as if the God of Loot has blessed the player ten times over and is constantly forgetting about the most recent blessings they’ve dished out.
Thankfully, all of this loot comes with a returning feature from the original Torchlight: pets. Instead of leaving loot where it drops because of a full inventory, a player can offload their excess loot off onto their pet, which can then be sent to town to sell for you. This is an absolutely fantastic feature that keeps the gameplay constantly moving forward, seeing how your selling off your lousy loot within the dungeon’s confines for the gold necessary to purchase higher level equipment in the town’s marketplaces. Other than that, the pet also acts as a companion who can attack enemies. Depending on what class the player chooses, this may be a minor convenience or an invaluable asset. Being a ranged character, I found this particularly useful as I let my pet distract enemies while I continued to fill said enemies full of holes with my trusty shotgun. 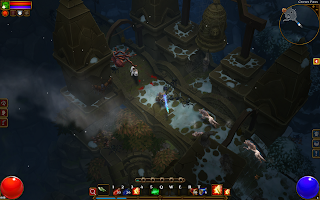 The random generation of Torchlight II’s dungeons is quite impressive compared to other games in the genre. From what I have encountered, all of its dungeons have thematic elements they wish to display and they always convey these elements wonderfully, despite not having a finite structure. While this is great on its own, Torchlight II also houses overworld generation too. Unlike the original title, which itself was confined purely to dungeons, Torchlight II also randomly generates overworlds to connect them together. Much like the dungeons, the overworlds’ generated convey a certain theme to them as well. This adds variety to the game and allows for it to be a bit more open-ended than its predecessor.

Moving away from gameplay-related aspects, the story is entirely forgettable. While there’s a heavy connection to the previous game, the story is so weak that it doesn’t decide to even use it to any great advantage. The music is made of quality stuff though, but it also lacks a memorable charm as well. The multiplayer was unfortunately a feature I was not able test for this review, but others have spoken highly of it and it’s nice to see that there are special mechanics built into it to decrease player hoarding and eliminate uncooperative gamers.
Putting aside it’s minor flaws, Torchlight II is a magnificent game in its execution. While some games strive to be different, it boldly plants itself into familiar territory. Instead of wading in the dregs of what has come before it, Torchlight II makes the most of its surroundings and it succeeds with flying colours.
– The V8 Ninja

The weekly discussion: The review dilemma

Hands on with Wii U: In reality it’s a bit of a gimmick