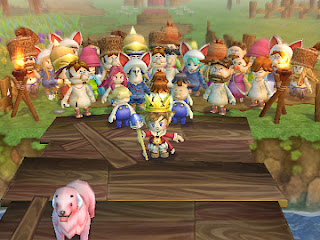 So it’s fingers crossed that the Vita version of this game does better on the charts, because it really does deserve to sell a billion copies. Unfortunately history is likely to repeat itself given how few people own Vitas, but if it does fail to light up the charts, at least it’s going to be one of the most loved games on the console again. Little King’s Story is pure and simple fun and nothing more – a rare breed of game that doesn’t try to be more complex than it needs to be.

The basic idea of the game is this – as a king you’re tasked with building up a kingdom and clearing the surrounding environment of demons – Oni – that are inhabiting the environment. You’ll be building structures and recruiting people into various different roles – both military and domestic, and the idea is to gather these people together into work units and direct them to various tasks. 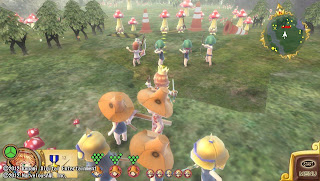 So for instance, a farmer can dig holes for treasure where there are cracks in the ground. Carpenters can build bridges, and soldiers can fight the monsters. There’s some strategy and management involved in that you’re limited to how many of these peons you can control at a time, but for the most part the joy of this game is in simply watching the kingdom build up slowly but surely. Little King’s story is generally a laid back, relaxing game, with the only real challenge being some of the later bosses, but that works to the game’s benefit – like a Harvest Moon game (the heritage is there since Marvellous owns both franchises), giving players stress or taxing them too greatly would simply ruin the happy-go-lucky atmosphere the game works so hard to build.

To those few people that have played the original game – note that this is essentially the same game as the Wii version. There’s a different plot (though in a bit of self-referential humour, the game often points out that you’re doing exactly the same thing you did last time), but the environment and levels are designed the same way and you’ll be doing the same things in roughly the same order that you did last time. 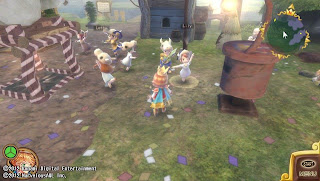 It doesn’t necessarily matter – this is a very replayable game and there’s a couple of subtle differences that make it worth a second look (such as some missions for high scores that can be shared online, and some expanded RPG elements that give micromangers a bit more meat to sink their teeth into). Above everything else though, Little King’s Story is a joy to play. The presentation is gorgeously warm, with cheerful characters and bright colours presenting a world that is a genuine joy to explore.

Case-in-point; It’s possible to track down costumes for your subjects, and make edicts to mandate they wear a range of other silly clothes. For instance I made one soldier dress as a mummy in a gas mask, and demanded that all of my citizens wore swimsuits. This has almost no impact on the flow of game, it’s just fun to do. And that, really, is how a lot of the game works. A lot of Little King’s Story doesn’t have much to do with completing the story part of the game, but it’s possible to lose hours just playing around in the little kingdom. 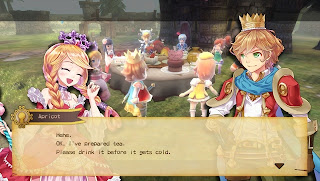 On the other hand, those who speedrun through it are going to be disappointed with its relative brevity. What extends the length is the simple fact that it’s fun just to sit back and watch the virtual people go about their lives. Citizens will randomly interact with one another (and possibly fall in love, at which point you can marry them off) and otherwise merrily go about daily routines. The AI and interactions are not as complex as, say, Skyrim, but they don’t need to be either – the impression that this is a living, breathing city of happy little people runs strong nonetheless.

There are a couple of technical issues that pull down the experience unfortunately. The frame rate doesn’t handle large groups of people so well and this is a problem when you’re in the centre of a large town, and there’s also some truly terrible translation work. Neither issue is enough to prevent Little King’s Story from being essential for anyone who likes fun games, but it would have been nice to be able to sit back and say this game is perfection.

I do get why this game isn’t the most commercially successful franchise out there – it’s a fairly aimless game and the charming presentation is an acquired taste. But it’s worth the risk for just about everyone because underneath that surface is a really addictive little package and it represents a nice diversification of the Vita’s game library.