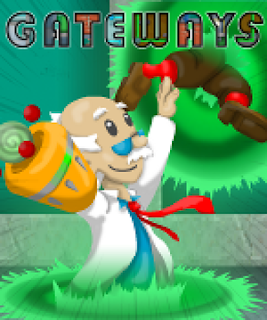 Here at Digitally Downloaded, we’re Portal fans. That might not come as a surprise to many, but many of us here are big fans of its mind-bending environmental puzzles. When Smudged Cat Games sent a review copy of its 2D Portal-like title Gateways, needless to say, we couldn’t wait to get our hands on it.
In our review, we stated that “Gateways works much better as a game than Valve’s collection-of-ideas presented in Portal.” It’s no surprise then that we thought quite highly of the game in our review, which you can find through here.
If you read our review, you’re likely to remember us saying this: “While it might be on the short side, the price justifies the sheer quality of the majority of the puzzles presented.” The price referenced to in the review was the (cheap) $4.99 USD cost to purchase the newly released game through Steam. But, Smudged Cat Games is so thrilled with the positive reviews for Gateways’ Steam release – like ours — that they’ve dropped the price of Gatewayson XBLIG to a mere 80 MS points. Before you start racking your brain trying to figure out Microsoft’s (frustrating) point’s conversion system, that’s only $1 USD!
Along with the price drop, XBLIG users also get a slew of new updates (available in the Steam version at release) to go along with the new sale price as well: normal difficulty mode has been added, which simplifies many of the later puzzles, rumble support, help menus that explain the gateway guns in detail, the ability to disable auto-save and support for 4:3 displays. There’s truly no better time to let Gateways bend your mind, because it definitely isn’t going to hurt your wallet.
Share this