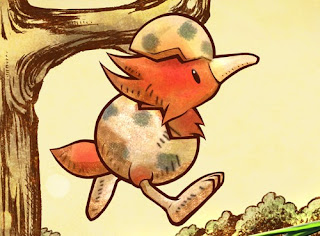 People with the Nintendo DS or 3DS may just have heard of Ivy the Kiwi. An utterly charming little puzzle game, Ivy was a perfect example of a game that used touch screen-only controls to great effect.

And now it’s on the iPhone and iPad, where it’s even better.

On the iPhone and iPad the game’s distinctive and beautiful art style is rendered in all the gorgeousness that the retina display allows. On the iPad the extra screen size allows for even more comfortable control input. Because the game was always touch-only control it works as well with finger swipes as it ever did with a stylus.

But I’m getting ahead of myself here. Ivy the Kiwi was a sadly overlooked game when it was released, so most people don’t know what it’s about.

At its core, Ivy the Kiwi is an endless runner. Players have no direct control over the adorable Ivy. She just runs around the level and will quite happily impale herself on a spike if it’s in the way. So to prevent Ivy from a premature death, players need to draw vines onto the playing levels. Ivy can walk on these vines, and by strategically placing them around levels she can eventually reach the exit. 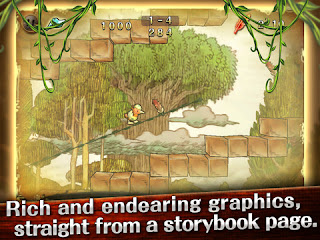 Of course, the level design is far more challenging than that. Players will also need to use the flexible vines to rubber-band Ivy into the harder-to-reach areas. There awaits feathers and other treasures – and some of those are difficult enough to drive the perfectionists mad. As cute as Ivy is, her game has some real fangs.

It really is a joy to play though. Swiping the screen to create vines feels intuitive and natural by the end of the first level, and across the 50 levels of the game not once did I feel like a failure was anything but my fault. This is a remarkably comfortable game to play on the touch screen.

It’s also entirely appropriate for mobile gaming. Levels are quite short, and so Ivy works for those short public transport commutes. Because it’s a reasonably challenging and highly engaging game though, it’s also suitable for longer play sessions; it’s clear that this game was built for a gaming console first.

It is an example of a game that works better on smart phones and tablets though. The iPad version of Ivy, especially, is the definitive one thanks to a nice big screen, gorgeous visual style, and plenty of room to swipe and flick the games industry’s premier Kiwi bird mascot around.