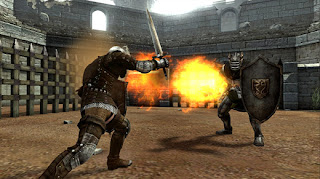 Gladiatorial combat, such as that seen in the Colosseum in ancient Rome, has been generally agreed to represent one of the most brutal, bloodthirsty and morbidly fascinating sporting contests known to mankind.

Thankfully the modern world has shunned the spectacle but the power of the virtual world enables the more violent and vicious aspects of these strangely compelling events be lived vicariously through either the medium of video gaming. Thus games like Clan of Champions are born.

Clan of Champions is a co-operative multiplayer (up to three) fighting game where the player takes the roles of a gladiator in an arena scenario, fighting for their lives against similarly armed and motivated folk. It asks a simple question: do you have what it takes to survive in such a desperate world? 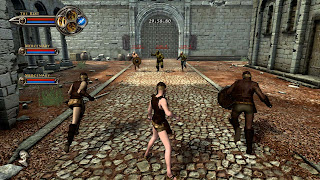 The game has a RPG and fantasy element, and players initially choose between three races. The choice between humans (all-rounders), elves (whose strengths are in trickery and magic, and not strength) and orcs (whose focus on strength and constitution comes at the expense of magical ability) may seem important, but thanks to attribute points and customisable weapons and armour, race plays a minor role and players of any kind can get by with their aesthetic preference.

An efficient tutorial takes the players, step by step (in five stages), through the required controls as well as giving time to master them against a practice warrior. The controls are easy to master and must be mastered if one wishes to be successful in the more advanced of the four difficulty levels. Make no mistake, Clan of Champions is a game of skill and rewards expertise over that of button mashing. 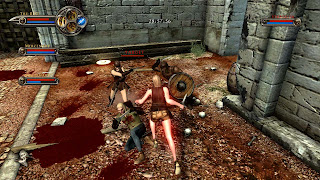 Despite being released on the PC, Playstation 3 and Xbox 360, the game plays impressively when playing on the keyboard (a rarity for cross-platform games like these), though some might find it a little sensitive on this platform and might prefer to stick to a traditional controller.

As with most fighting games the goal in Clan of Champions is simple – using your team of three, attempt to eliminate the enemies before they eliminate you, or the time runs out. To do this, you use whatever is at your disposal – which is often your sword, shield, boxing fists or feats of magic. The actual battle is realistically tough against players with good defence or armour, but players have tricks at hand to break down this stubborn resistance, with high, middle or low attacks. A solid defensive mechanism means that split second timing is often required to block as well as parry – with superiority rewarded not only with tactical advantage but possibly depriving the opponent of their weapons and armour. 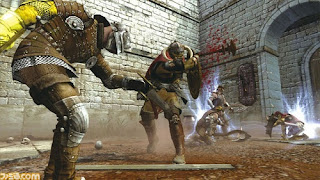 Skill in the arena is well rewarded with experience that will grant new abilities (both passive and active) corresponding to new power attacks, making the characters more efficient, more powerful and much scarier. Beyond these abilities (marked in their extensiveness of available choices), the player can also upgrade equipment – awarded from the bodies of your victims. An excellent array of customisation allows for the upgrading of weapons (one or both hands), shields, helmet, both arms, both legs and body armour. Further, each piece of equipment can also be further advanced through skill in the armoury – where you can turn two weapons into a more powerful one.

Clan of Champions is well served by professionally designed graphics, mimicking real battle physics and providing hours’ worth of enjoyable virtual gore. It is supported by aesthetically pleasing visuals, though the rather generic fantasy level design does feel a little soul-less. There’s also quality voice acting and a decent but not spectacular score.

It is clear that playing through the wide range missions across multiple difficulty levels will provide more then ample gameplay for most fans of the fighting genre. Whilst fun in solitary play, the power of combing with friends for co-operative multiplayer mayhem is where the real value of this game lies. NISA has published a wonderful fighter here, one which will fight its way into many collections and hold its own once there.