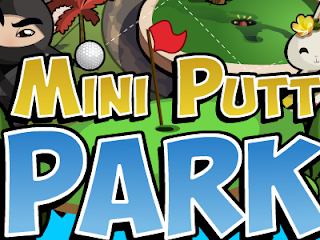 If you’ve ever delved into the land of free online flash games, you probably noticed the abundance of golf simulations. The quality of each game is up for debate, but the sheer number of them indicate that people enjoy a good putt. Within the context of social games, though, mini golf is relatively untapped (with even fewer games having a creative emphasis). Thus, Majesco’s Mini Putt Park should satisfy a certain niche.
While Mini Putt Park still pales in comparison to some of the top-tier online games, it’s a solid contender for gold within the world of Facebook. There’s a certain simplicity and elegance to the gameplay that makes it simultaneously addictive and gratifying.
This is largely thanks to the control scheme. It’s just a matter of aiming with your mouse and clicking. You also get a nice power indicator in the form of a percentage atop your golf club. Being able to see a tangible digit is a lot friendlier than the standard ambiguous power bar and should suit the casual audience just fine. 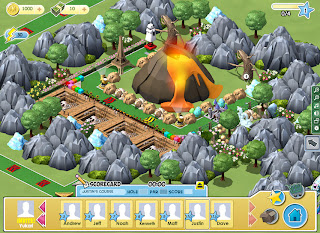 The “addictive” part is indeed by design – this is a Facebook game, after all. Players are encouraged to log in frequently so that they can earn money in games with limited run times. You probably know the drill by now – invite more friends, get benefits.
The game employs a couple other typical social tactics as well, namely the use of real-life cash to purchase premium items. It’s perfectly natural for developers to attempt this on games based on a network, but it comes off feeling a bit out of place in the context of golf.
Completing a hole rewards you with currency and experience. That experience rarely comes into play at the beginning of your career, but its role increases the further you become entrenched in the game. This is because the game requires energy to play a course and a level up fully restores your energy. For those not in the know, “energy” is an established trick used to limit your playtime (or rewarded playtime) so that you keep crawling back for more on a daily basis.
As far as the track designer goes, it’s decidedly versatile. Even with a basic, credit-devoid account, you can create expansive and courses with visual grandeur. Some items merely occupy the background space, but others serve as obstacles and mind puzzlers. Naturally, items must be purchased with in-game cash (the kind you earn as opposed to buy). Your courses can be shared with a friend, which is a chief reason to invest in the communal facet. 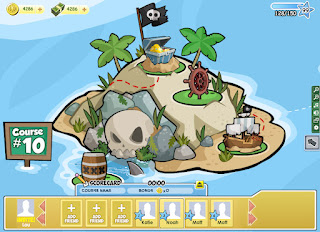 There are a few flaws with the formula, however. In fitting with the average Farmville, Mini Putt Park takes place in an isometric perspective. Unfortunately, this makes putting slightly more of an ordeal than it needs to be, since objects can obstruct your view. Thankfully this is a rarity, but hiding the flagpole behind an object leads to a particularly cumbersome experience. I understand the temptation to fit in with the rest of the market, but the isometric viewpoint comes off as unnecessary for golf. At the very least, the ability to pan around the camera would be welcome.
The second issue is decidedly less glaring, but present nonetheless – the lack of differing heights. If you’ve ever gone mini putting, you probably remember that one obnoxious course that always sent the ball straight back at you after an arduous climb to the top. For better or worse, you won’t be throwing a fit playing this. Still, here’s hoping elevation gets added in a future update because it would really heighten the game’s customization options (no pun intended) and ramp up the relatively easy difficulty.
If you’re looking for a game of mini golf with more depth than your average flash game, consider taking up shop at Mini Putt Park. Though it still has a few kinks at the moment, it’s a solid effort to spice up the genre.
-Clark A

Mugen Souls and the difficulty of reviewing niche games