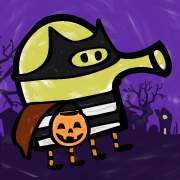 Doodle Jump creator Lima Sky is being awfully active all of a sudden, after hearing almost nothing from them since the game launched. Now not only is there a Halloween update incoming, but a board game too.

Yep. A board game, which seems oddly appropriate doesn’t it?

Ravensburger has produced toys, games, puzzles and more for over a hundred years. Now they’ll be pairing with Lima Sky to make a game based on the popular iOS platformer, Doodle Jump.

“Ravensburger is a world leader in hobbies and traditional gaming and certainly our number one choice for a partner in this space,” remarked Lima Sky Chief Licensing Officer Eric Karp. “Their board games will perfectly complement our rapidly growing roster of premiere licensed Doodle Jump goods.”

Also on the way and just announced, a Doodle Jump Halloween content update will soon arrive. The update should go live in just a few days and will bring all the previously released Halloween content (plus some new outfits) for the game together under one big download.