Lukewarm Media and Reverb’s multiplayer dinosaur romp Primal Carnage is up for preorder on the PC, complete with beta access and a feathery perk.

Gamers who plunk down their $14.99 USD for a preorder on the game’s official site will get a beta key (usable on Steam) so they can dig into the title’s chompin’ action early. They’ll also nab an exclusive ‘feathered raptor’ skin for the Velociraptor class dino that’ll be downloadable when the game officially launches later this year. 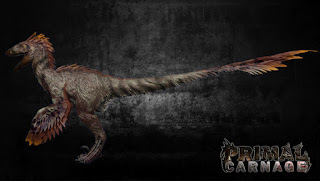 Not since 1993’s Jurassic Park has the terror of a dinosaur onslaught felt so real and thrilling. With Primal Carnage, players hunt AND are hunted, and must choose between defending themselves against a slew of deadly prehistoric creatures with an arsenal of today’s weapons, or decimating humans into piles of sinew as vicious carnivores of all sizes and variety. With five unique human classes and five unique dinosaurs, Primal Carnage is a dynamic, enthralling experience. Rendered in high-fidelity using the Unreal Engine, this is one of the greatest looking digital games to date.
Features of Primal Carnage include:

in a rock-paper-scissors fashion

Primal Carnage is undeniably interesting (especially for a dinosaur buff) and the idea of hunting a bunch of trigger-happy mercs as a pack of ‘raptors is, to say the least, an exciting proposition. … Come to think of it, maybe I’m a little too excited about that. *ahem*

Trailer: Plants vs Zombies vs Pinball