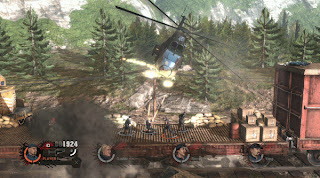 I love The Expendables movies. My wife calls them “grandpa’s action movies,” and they are that in every possible sense; they take the world’s washed-up action heroes of the 80s and throw their creaking bones into a hyperviolent action movie. It’s like The Avengers, with wrinkles.

It’s just brilliant fun watching Sylvester Stalone’s steroid-filled veins popping out of his arms as he pretends he can still run. Or watching Jason Statham pretend the world still thinks he’s tough because he can handle a knife. And of course it’s amazing to see that Dolph Lungdren still pull off the human tank look. When Mickey Rourke manages to outclass everyone in terms of acting ability you know that you’re going into these films for the crimson spray and bullet ballets not academy award-winning thespian dialogue, but The Expendables is so pure in delivering the silly fun that movie entertainment rarely gets better.

The first was good enough, but The Expendables 2 ratchets that fun factor up to 11 (to anyone wanting proof that: Chuck Norris is in it. Q.E.D), and this time around there’s a licensed game tied it to it. 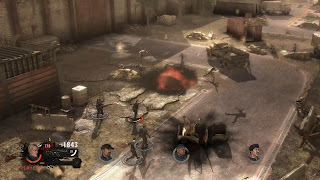 The Expendables 2 game is like the two movies: it’s terrible, but it is so much fun.

I really can’t be bothered going through the game’s plentiful technical problems. I’ll just point you to another review that does that: IGN review. Let’s just accept that this game is a dual-stick shooting game that is riddled with technical flaws and move on because, like the movie, the faults are really not the point. The point is that this is the most brain dead game of the past few years, and it is just awesome at it.

There’s no plot here that I can remember – I think there was a cut scene or two before and after each level, but then the swarms of enemies jump up and say “hello,” and it’s party time. Gun flashes pulsate with the regularity of strobe lights at a rock concert and the noise is a cacophony of explosions and bullets. It’s almost impossible to aim your weaponry at any individual enemy, but like that even matters; fire off a bullet in any direction and it’s going to hit something. 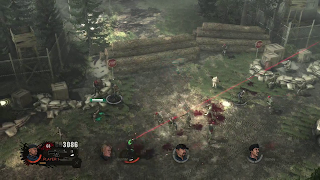 None of the characters in the game have much personality (so, just like the films), but they look close enough to their human actors to work, and just like in the movie, they all have unique superpowers… I mean weapon skills. In-game Jason Statham (see, can’t even remember the character’s name) is good with his knives. Stallone on the other hand has dual pistols. This ever-so-slight gameplay variation means helps break things up slightly, and multiplayer especially has just enough teamwork about it to bring in the buddy-buddy theme of the movie.

For some reason the developers thought it would be fun to have the occasional moment where one specific character needs to do something not directly violent (like plant bombs to blow down a wall) and that his team-mates need to protect him. This is fine for the teammates, since they still get to shoot stuff. Pity the poor guy laying down the explosives, though. It might only take a second to do, but that’s a second where he’s not shooting stuff. And that second is deadly boring.

The game makes up for those moments of boredom with the super kills though. Killing stuff builds up a meter that, once filled, allows you to unleash a “super kill,” complete with a close-in zoom and a lot of gore. 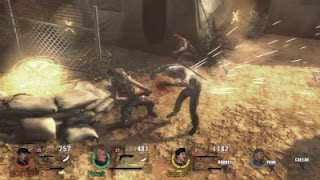 I can’t even describe how basic The Expendables 2 is. It’s best played in short bursts because otherwise it becomes very repetitive, and it’s best played with friends because the AI, while competent at killing stuff, doesn’t laugh along with you.

It’s also best played after a few beers. And just like the movies, go into the game with those beers and right frame of mind this grandpa’s action title is a whole lot of fun.

FarmVille 2: Will it be the failure that will break Zynga?