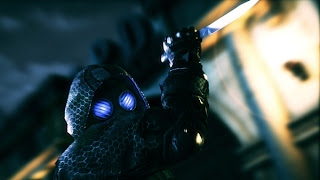 A stash of green herbs. Check. A large amount of ammunition to re-kill hordes of brain thirsty zombies. Check. Ladies and gentlemen, welcome to Raccoon City. Following the T-virus outbreak in Raccoon City, Umbrella has sent in its own Security Service Delta team to collect the T-virus before it ends up in the wrong hands.

It’s part of the Resident Evil series (although non-canon), but Operation Raccoon City doesn’t lend itself to the staple of being a survival horror game. With loads of ammunition and a ton of healing items, it transforms into a third-person Left 4 Dead. What is most interesting about Operation Raccoon City though is that there are three groups vying with one another. Umbrella, the zombies, and the US Spec Ops. Umbrella’s Delta team will encounter both of its opponents many times throughout their missions, sometimes at the same time, proving for interesting firefights.

Like Left 4 Dead, your group in Operation Raccoon City is made up of four members of Delta squad. With each member having their own individual abilities, it can allow for some interesting team combinations. Vector is able to cloak himself and assume the identity of the Spec Ops enemies, whilst Four-Eyes is able to program the zombies to fight for Umbrella. Over the period of the campaign, you’ll find which character works best for you and stick with him/her, as those special abilities prove to be the only differentiation when it comes to gameplay. 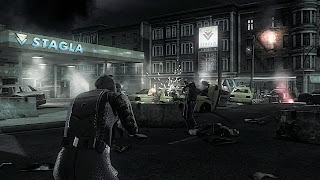 There are some interesting mechanics introduced into the Resident Evil world in Operation Raccoon City, which work well with the increased numbers of the walking dead. If you hit a Spec Ops opponent enough times or slice him with your knife, he will begin to bleed. This results in a large group of zombies swarming towards them. Of course, this can happen to you as well, and it can get very stressful trying to survive the oncoming onslaught. Additionally, the zombies can infect you with the T-virus. When infected, your health bar slowly depletes. Once depleted you will turn into a brain-hungry zombie yourself. Within the multiplayer aspect, you begin to hunt down your teammates until they kill you, however in the singleplayer this means an instant death. You can heal your wounds though with a spray on the anti-virus, however they’re rare to come by.

If you play the game by yourself, although only essentially having a quarter of the experience, you can still have a great time. The AI is really good at hitting enemies and covering. They also help you out whenever you’re in a tight spot, by knifing a zombie or spraying you with a herb. Overall you will be doing most of the work though, which can be difficult in sections which see you in a bottleneck against both the zombies and the Spec Ops.

Yet when playing with others, it becomes another form of hell entirely. Most of the time (at least, in Australia), there is a great amount of lag with everything including using items or shooting. Sometimes you’ll get a good match, but good luck. I’m not sure how many people still play Operation Raccoon City, but I rarely found a game in the online campaign at all. It’s a real shame that the multiplayer aspect doesn’t hold up on its own. 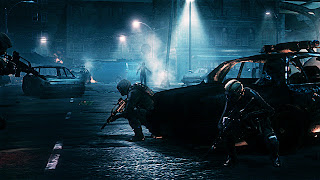 Operation Raccoon City is very hit and miss when it comes to its visuals. The character models are very nice to look at, yet some textures look out of place. Also the environment, which is very dark, fails to visually point you where you are meant to go. In one area of the game, you have to wander around a file room, finding five different files to destroy. Every isle looks the same, and you get very confused trying to find those last few files. The music doesn’t deviate much from that in Resident Evil 5, and nothing is that memorable.

The campaign is very short. I was able to complete it on veteran in about seven hours. But a lot of the time it feels very repetitive. The zombies, rather than coming from all walks of life within Raccoon City, all look the same. Infact, there are only around six different zombie models. Lickers, Hunters and Crimson Heads attempt to mix up the action, but it’s virtually the same every level. The most interesting parts of the levels are undoubtedly the boss battles. One of the most memorable being having to fight off three tyrants in a small area.

Luckily, the movement system in the game moves away from the tank like controls seen in the previous games of the series. When sprinting you are able to dive, which is essential if you need to dodge last minute from an oncoming attack. Additionally, if you simply push the control stick against cover, you automatically crouch behind it. It’s a very good system and doesn’t bug out too much. The cover is also really good at blending into the environment. You won’t find jarring concrete blocks conveniently placed in the streets, but rather abandoned cars will prove most useful. 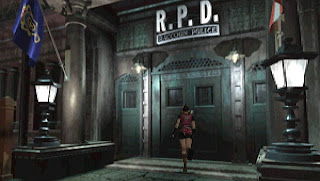 There is lots of post-game content as well. You can play the Spec Op side of the mission, in the form of DLC. The first mission comes as a free download. It proves to be more of the same, (and the characters share the same abilities). There is also PvP multiplayer. You have your staples, a team deathmatch, and a capture the flag where you seek out the G-virus. Survivors is a team free-for-all, with Delta team fighting Spec Ops who are both fighting the zombies. While Heroes sees you play as series favorites such as Jill Valentine and Leon Kennedy.

I would love to talk how amazing the multiplayermultiplayer, and I am unable to get a match it really lessens the experience.

Operation Raccoon City is a real hard one to score. As a singleplayer experience, it’s great. The AI is pretty good and will cover you when you need them to. Yet the multiplayer, even when it’s working technically right, just fails to provide the same experience. Considering the game has now been out for almost half a year, it’s sad to see the lack of people still playing it. Perhaps if you have a group of four and you each find a cheap copy of the game go for it. If you don’t have anyone to play with, and you have a craving for Resident Evil, you’re going to find a much better experience in the main series.