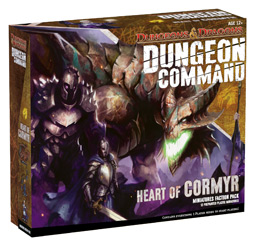 Welcome to a new feature at Digitally Downloaded! We’re gamers of every kind here, but one thing is constant amongst us – we go to where the good gaming is. A lot of gamers forget that games go beyond the TV console, so each week we’re going to highlight one of the exciting board games out there in the market.

We’ll start the feature off with Dungeon Command – a new tactical miniatures game from Wizards of the Coast set in the Dungeons & Dragons world. The basic idea is a little like a small-scale take on Warhammer: players build an “army” made up from a range of different miniatures, each with different strengths and weaknesses, and then try to outmanoever one another on the battlefield.

There are two different “packs” of miniatures available so far – Hearts of Cormyr (complete with dragon), and Sting of Lolth (evil spider-loving dark elves). Those are designed to be starters, and players who buy additional packs of miniatures can mix and match their armies to maximise the strategic potential of the force they can field.

For Dungeons & Dragons veterans, this might sound familiar, and in some ways the game is similar to the Dungeons & Dragons miniatures game of a couple of years back. There are some serious improvements to the formula this time around though that should make the game more accessible to a broader audience. 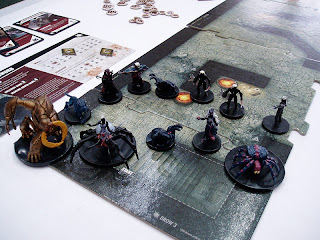 For one thing the miniatures in the box are not randomised. Where D & D Miniatures worked a bit like Magic the Gathering in that you’d need to buy hundreds of boxes to ensure you had access to the best miniatures, as the rare pieces were hidden away in a small fraction of random boxes, Dungeon Command is more focused on keeping the action on the board, rather than all-but guaranteeing a win to the person who spent the most money.

The on-board action has also been tightened significantly. Dungeons & Dragons continues to do away with luck in its board game projects, and it’s a welcome development for my mind. There are no dice rolls in Dungeon Command. Rather, commands are given out through the use of cards, with the results of those cards nice and predictable. There is strategy involved, as your opponent doesn’t know what cards you’ve got in your hand, but that annoying habit that dice have of ruining what should have been an easy-win has been removed.

There’s a nice ebb and flow to the game, too. The game’s morale system as well as the small number of miniatures on the board at any one point in time rewards aggressive play, so games tend to be short, sharp skirmishes, and like the best skirmish games, many of the pieces have special effects that require the teamwork of an allied piece. There’s a lot of strategy involved in being really good at this game, and players need to be masters of both timing and movement to be successful. As such, there’s a chess-like thrill to watching carefully planned strategies pull off, or alternatively finding a way to duck through an opponent’s trap.

The miniatures are simple plastic pieces, but they’re nicely detailed and pre-painted, and the board is of a similar glossy, hard stock that the other Dungeons & Dragons games have done so well. The rulebook is a little more complex than some of the other board games on the market at the moment, but most people should be comfortable with the system in a game or two – it’s really quite intuitive underneath all those rulebook words.

It’s not as collectible as its predecessor, but Dungeons & Dragons Command is another accessible and fast-playing board game from Wizards of the Coast. It’s games like this that can be really effective gateways into the full Dungeons & Dragons experience.

The world ends tomorrow…With You