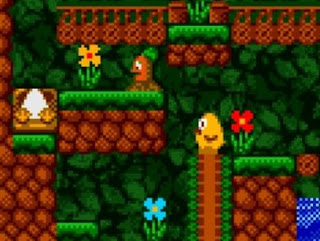 The Game Boy, and later Game Boy Color, had a fine heritage in puzzle gaming. From the obvious (Tetris), to the most niche games possible (Catrap), there really was a puzzle game to suit any player on Nintendo’s classic handhelds.

Toki Tori is the most recent classic puzzler to hit the Virtual Console. This Game Boy Color game is part of a franchise that still exists today (as opposed to a series that is now dead and buried; never what you could call ‘mainstream,’ but it has its fans. For those who haven’t experienced the series before, here’s a nice, cheap place to become introduced.

At a basic level it resembles a 2D platformer. The aim of the game is to wander around an area, rescuing eggs. Collect them all, move on to the next level. Couldn’t be simpler, right? 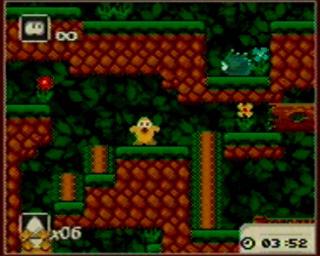 Problem is you’re in control of a completely useless (albeit adorable) hero. He can barely jump, has no weaponry to protect himself, and to make matters worse, he’s stuck with a time limit to accomplish his task. He would never be able to achieve anything were it not for the fact he has a range of handy tools at his disposal. Bridges, freeze weapons, teleport devices, the little character has a wide range of useful stuff at his disposal.

Each level presents a limited range of tools to get from start to finish with, and let’s make this clear from the outset – the resources in this game are limited. There’s one, perhaps two paths through each level, so working out the precise order to accomplish the task at hand is where this game’s puzzle element comes in.

Given the creativity of the tools at hand, it’s a pity that the level design is so restrictive. Modern puzzle games are all about freedom; allowing players to simply play around in working towards a solution. Going back to the old format of puzzle games is quaint and nostalgic, but not especially invigorating. 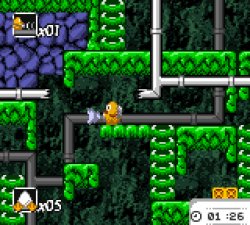 Equally problematic (and decidedly retro) is how linear the game. Stuck somewhere? You’ll stay stuck. Modern puzzle games tend to allow people to skip puzzles they’re stumped on and return to the difficult ones more experienced and prepared for the challenge. Not so here. On the other hand there is a fair amount to this game, and while especially difficult puzzles can stump you for quite a time the sense of reward for getting all the way through this game is substantial.

Really, this game gets by now on the strength of its presentation, which is delightfully retro, as well as the simple fact that it will offer puzzle game veterans a genuine challenge. It controls horribly, but it escapes negative marks because controls aren’t exactly that important to a puzzle game. It’s slow paced, but I doubt action game fans would have been interested in this one in the first place. It’s a game for genre fans, then, but it’s a good one.