The concept that Ace Mathician is built upon is far more complex and creative than the game itself. Considering how clever that concept is and how fun the game is anyway, that’s just fine.

The basic premise of the $2 DSiWare download is this: there’s a koala named Ace, and she desperately wants the fruit in each of the game’s 30 levels spread across six worlds. There is some basic platforming involved in this quest, yes, but the main hook that explains the Mathician part of the title comes from a very unique gameplay mechanic…math. Wait, no need to panic!

Math is simply used to manipulate levels and move platforms, so the game requires no real expertise in any particular area and certainly won’t make you memorize any formulas. In fact, Ace Mathician could even serve as a fun educational tool to kids who are just learning how basic algebra and graphing work. It’s basically Scribblenauts: Math Edition–instead of getting tangible feedback from the words you type, you’re stringing together equations based on what a particular level gives you to work with, and seeing the visual impact they have on that level’s geography. 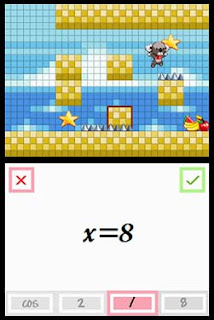 In order to better explain how the mechanic works within Ace Mathician, here’s an extremely simple example taken from one of the game’s short tutorial levels. In this level, the fruit is easily within Ace’s reach; all she has to do is walk over to it. But what about those three shiny stars? Something good must happen if she gets those. Alright, two of them should be easy enough to nab, with a small jump needed for the second one. The third one, however, is too high for Ace. Wouldn’t it be nice if the platform underneath the last star could rise up a little bit, say, six units? That would probably be just enough to propel Ace to the final star, and by extension, to victory!

That’s how your average Ace Mathician level plays out. Since none of the platforming is at all difficult, thankfully the real challenge comes from the puzzle-math aspect of configuring the proper equations at the right times and under the right circumstances (wait for an enemy monkey to be in a certain spot to eliminate him by moving a platform to his location, make sure that doesn’t happen to Ace so she won’t die when you submit your formula, etc.) so that you have a clear path to the stars and fruit. The purpose of the stars is to unlock the bonus fifth level in each world–get three stars in levels 1-4 in a given world, and the fifth level will be unlocked. The fifth level also contains stars that are used towards unlocking the secret sixth world, which becomes available when all of the stars in the previous levels and worlds have been collected.

The creative potential for level design in Ace Mathician is staggering. Even though each level only takes place on a single screen and features no scrolling whatsoever, developer Goodbye Galaxy Games manages to construct plenty of tricky and stimulating scenarios with this seemingly limited landscape. Sometimes each successive world adds another gameplay element on top of what’s already there (multiple groups of platforms that can be manipulated independently, deadly watermelon seed-spitting monkeys, etc.), but other times the addition is merely a palette swap for an enemy or an element that has already shown up once previously.
This layering on of new components never overcomplicates things in any way at all; far from it. 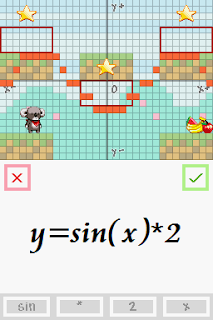 For all of its conceptual innovations and brilliantly imagined mechanics, Ace Mathician is a very simple game. The single-screen levels last about five minutes or less, on average. With only 30 levels total between all of the regular and bonus levels (not including the painfully easy tutorial levels), the six themed worlds featuring different music and aesthetics can be completed in an afternoon and will fly by in what feels like an instant. In fact, if you don’t pace yourself by limiting play sessions to one world apiece, you’ll find that the game is over before you know it.

This speaks to the addictive nature of the game, sure, but it also speaks to how little content it has. And since Goodbye Galaxy Games has stated that it’s probably moving on to the Vita after DSiWare (it also developed the Flipper series) instead of the 3DS eShop, Ace Mathician may very well be the developer’s first and only entry in the spectacular universe of the title. This would mean that after a few measly hours spent with this fusion of math and platforming, the gaming public would never see anything more from Ace the koala and her amazing adventures.

As good as Ace Mathician is while it lasts, that’s not to say there isn’t a fair amount of room for improvement. The title seems to be plagued by a lack of polish; in any case it’s readily apparent that this a low-budget indie download. There are small glitches and oversights everywhere from the menus to the levels themselves, such as the mostly missing sound effects when selecting a world or level and sometimes even when Ace excitedly exclaims, “Yeah!” right before munching on her precious fruit. More annoying is how hard you have to press the stylus to select a math symbol on the touch screen; it’s incredibly unresponsive and takes quite a bit of getting used to.

An unpolished and sadly short experience, Ace Mathician manages to simultaneously inspire your imagination and disappoint you with its many imperfections. A tragic masterpiece, then.