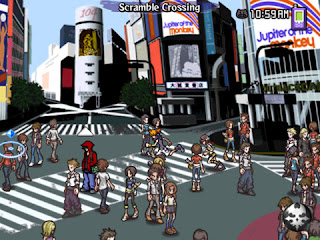 The World Ends With You (TWEWY) is a pretty big deal amongst a very small group of gamers when it was released on the Nintendo DS. Despite only shifting around 650,000 copies worldwide, when a teaser website featuring TWEWY art work went live, there was a lot of excitement around the Internet for what was expected to be a TWEWY sequel.

Then there was a fan uproar when it turned out to be a rerelease of the original game on the iOS platforms. A pity the release had to be clouded by controversy though, because moving past that silly argument that iOS is incapable of playing “real games,” TWEWY plays great on the iPad, and is an essential title for anyone who wasn’t in that 650,000 people who bought the game the first time around.

The plot is pure genius, and very manga in terms of theme and style. Not that I want to ruin anything, but a group of protagonists are caught up in a “game” between reapers, where they’re given a short time frame in which to accomplish “missions” around Tokyo, with failure meaning annihilation. So, if you’ve ever read a manga like Ikigari or Death Note, you have a rough idea of the kinds of themes that TWEWY explores. Thanks to some superb (albeit brief) dialogue and incredible art work (especially in high resolution on the iPad), this is one of the most compelling stories available on the iOS app store. 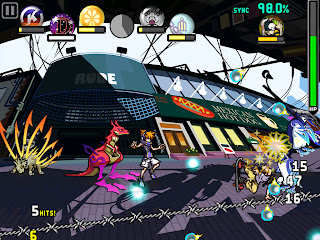 The original DS game made full use of the dual-screen nature of the console, which is, of course, impossible to replicate on the iPad. This means TWEWY has an all-new combat system on the iPad, and credit to Square Enix because it plays incredibly well. At its core the combat of the game is very fast-paced, but makes use of standard RPG magic spells and physical attacks. The twist is that those commands have been transformed into a simple range of contextual gestures for this game. Fire spell? Draw a line on an empty part of the screen. Lightning happens by tapping directly on the enemy. A physical attack might be to swipe quickly through the monster. In this way, TWEWY is a more immediate and direct kind of action RPG – far less abstract as button presses can be – and the gameplay is fundamentally more exciting for it.

This was already a touch-screen heavy game, so the control setup was always going to transfer over well to the iPad, but if anything, it has to be better in this version of the game because of the increased screen real-estate. The larger screen allows for a greater margin of error in terms of control input, and not once did I encounter anything but the greatest ease in moving around and fighting efficiently. 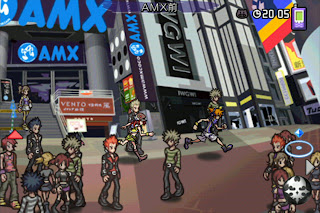 Beyond the furious swiping and tapping, what’s especially interesting about the combat system is that at any one time you’ve got a very limited range of usable attacks. Each action is mapped to a “badge,” and you’re limited in the number of badges that the hero can take into battle. And so there’s some depth in terms of picking the right balance of badges for battle. These badges also level up in experience so in true Square Enix style min-maxing your character setup is a compelling and often complex experience.

Outside of the combat there’s some limited puzzle solving and NPC interaction, but TWEWY is clearly a game designed to be portable so it doesn’t go too heavily on offering content that will force you to sit down for hour at a time. In this way too it’s a natural fit on the iPad. It’s easy to pick up and play for short bursts of time, but because the underlying systems are so comprehensive, it’s also possible to spend hours at a time on the game if you get really hooked. 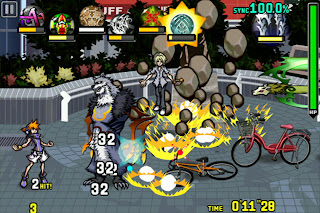 And a special call-out to the music to wrap things up. TWEWY has a stellar soundtrack that is very appropriate in terms of energy to the Tokyo setting. Having been to Japan a couple of times I felt a little home-away-from-homesick when listening to the music and exploring the heavily abstracted, but entirely familiar streets of Tokyo.

I can’t make any further comparisons between this game and the DS original because I never did play the DS game, however, I don’t think any comparison is necessary. Whether this game is better or worse than the DS game is largely irrelevant; it’s a really fine game that looks great, sounds awesome and plays impeccably.

For many of you this is going to be the most expensive iOS game you’ve purchased yet, but if you have an iPad you owe it to yourself to buy it. It’s yet more proof that the iPad is a device that is genuinely worthy as a gaming platform.

Video Review: Way of the Samurai 4