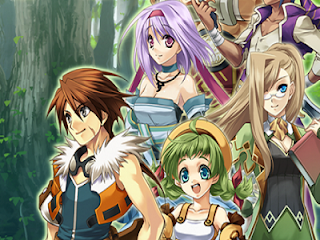 The RPG genre is a nice fit for the iPhone. Turn-based combat and single-button input reduces the discomfort from virtual control systems, and this is a genre where fans are quite happy to play with simple 2D sprites, making games relatively easy to develop for small teams.

That said, Grinsia is a rare example of a traditional sprite-based JRPG on the platform. Why that is remains a bit of a mystery to me – perhaps because the development time of an RPG tends to be extensive – prohibitively so for the $0.99 cost most iPhone games end up priced at – or perhaps it’s because the iPhone has only just taken off in Japan. Either way, it’s just as well that there’s not that much competition for Grinsia on the App store, because it’s not a game that would hold a candle to a real master of the genre.

That’s not to say it isn’t simple fun. Characters develop in a very traditional manner for a JRPG – there’s limited room for customisation, and instead skills are learned as characters grind up new levels. Mixing and matching equipment allows for a little more customisation, but the real challenge in this game is in using the characters skills in a complementary way – you’ve got the usual tanks, healers and ranged units, and enemies have the usual range of resistances and weaknesses. 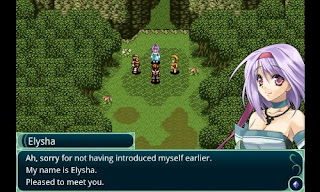 That said, it’s not a difficult game, so the only time you’ll need to be strategic is in the boss battles, where the difficulty spikes tend to be significant. Otherwise it’s a fairly straightforward game of cruising around labyrinthine dungeons and slaughtering legions of palette-swapped enemies. Between dungeons there’s towns to visit, and the helpful locals will point you in the direction of the next quest.

In other words, it’s a game that could have been directly out of the SNES era. That in itself is not a bad thing at all. As someone who fondly remembers games from that era, the sprite work, the gorgeous colours and the basic gameplay mechanics give me a fuzzy nostalgic feeling. 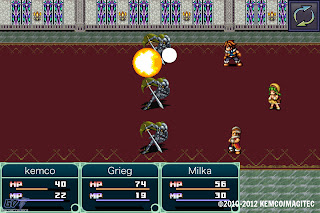 So far it all sounds like a standard retro-JRPG, right? It is, and it is completely inoffensive for all that. Unfortunately, when I get to the dialogue, the game comes crashing down. The story is very amateur, and I’m still not entirely sure this wasn’t a RPG Maker fan project. When you’ve got an evil empire and conversations filled with cringeworthy JRPG clichés it’s really hard to keep interest – especially when the original Final Fantasy games did this better 20 years ago. This one isn’t even self-referentially funny… to be honest I don’t know what it’s aiming at being. But whatever it wanted to be, it fell short of the mark.

A JRPG without a compelling plot is never going to be essential. That’s not to say this isn’t fun, but it’s a game that’s purely for people who grew up with JRPGs, and are willing to overlook some pretty major flaws in order to an enjoy a throwback to the past.