Developed in partnership by Kojima Productions and PlatinumGames, Metal Gear Rising: Revengeance will drop onto consoles on February 19th 2013 for the PS3 and Xbox 360. The game casts cyber-ninja Raiden in the title role and places a heavy emphasis on “pure action and epic storytelling”.

In the near future, cyborg technology has become commonplace throughout society.  Three years have passed since the collapse of the Patriots system that had been secretly controlling the global power balance from the shadows.  However, peace remains elusive.  The dissemination of cybernetic technology has triggered instability and conflict as those who control the trade gain increasing power.  Furthermore, large ‘Private Military Companies’, or PMCs, that had been supported and controlled by the Patriots have collapsed, spawning countless rogue entities with origins to larger criminal organizations.  These renegade PMCs employing cyborg technology have become increasingly more disruptive shifting policy and power at will.  As a member of the peace-keeping PMC ‘Maverick Security’, Raiden lives by the mantra of protecting and saving lives.  But as the world plunges further into asymmetric warfare, the only path that leads him forward is rooted in resolving his past, and carving through anything that stands in his way. 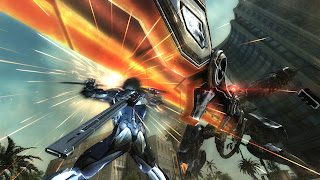