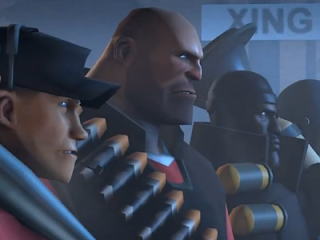 In what may be another entry in Valve’s war against productivity, Valve has decided that its ever-popular, free-to-play masterpiece of a first-person shooter named Team Fortress 2 must have a cooperative horde-styled mode.

Yes, the multiplayer game mode that was popularized by Gears of War 2 is finally hitting the free-to-play juggernaut that is Team Fortress 2. Along with the new mode expecting to be released on this coming Wednesday, Valve has created a lovely short in celebration of the new mode. Feast your eyes on the short below;

Other than giving some very big hints, this trailer of sorts never actually explains much of anything. That is where the official TF2 website comes in handy.
The new co-op mode, dubbed ‘Mann vs. Machines’, pits six players against robot-themed versions of every single class found within Team Fortress 2. Not only that, but three special types of robots are thrown into the mix as well, with those types being gear-based robots (I.E. the demoknight, snipers with bows, etc.), giant robots, and unique robots (the walking-bomb-esque Sentry Buster and an unnamed machine that uses continuous tracks). After completing a wave in the mode, players will have the opportunity to upgrade their abilities and weapons in some unannounced way which is scheduled to be revealed tomorrow (14/8). “Incredible Loot” is promised to all of the players that survive all of the waves in the new mode, that of which is planned to be detailed the day the mode is available to the public on Steam (8/15).

As Valve sometimes likes to do, an alternate reality game (ARG) was created to hint at the forthcoming game mode. I will not be covering the ARG as it involves male pregnancy and talking babies. Yep…that’s TF2’s sense of drama for you. If you do feel the urge to check it out, the PC gaming website Rock, Paper, Shotgun has transcribed the major milestones of the 12-hour-long hunt.

As always, any major Team Fortress 2 updates usually spark a small flame of excitement in myself, with this one being no exception. And with the promise of incredible loot, that only makes the flame burn brighter. Needless to say, I am eagerly anticipating the release of the update.