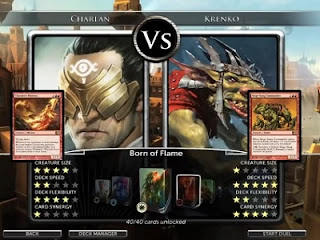 Magic The Gathering is a game I’ve long felt belonged on the iPad. After all, the physical card game is so popular precisely because it is portable – anywhere becomes an impromptu battle of the minds with this game, and unlike a game like chess, it’s easy to pack away afterwards.

So it amazes me that it’s taken three yearly instalments of the Duals of the Planeswalkers series for it to come to the iPad. The good news is that it’s worth the wait.

(Check out our review of last year’s game here)

For the uninitiated, Duals of the Planeswalkers is an “arcade” take on the collectable card game. Rather than carefully construct a deck of cards from hundreds – if not thousands – of dollars worth of cards to try and find the ultimate combination that will destroy all comers, these games give players a choice from a few pre-set decks that have been carefully built for balance. There’s not much room to customise the decks, which is a bit off-putting for Magic veterans, but it does make the overall game far more accessible and fair for players of all experience levels. And so, in turn, the game is actually more strategic because it’s not a case of “he who spends the most money wins the game.” 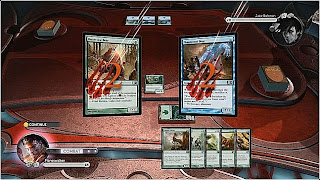 There’s a campaign story mode – though the story isn’t exactly invigorating, and some online multiplayer modes, which is where the meat of the game is. What makes the game something special on the iPad (in addition to being a well-made take on one of the greatest card games ever) is the presentation. The game looks as gorgeous on the iPad as it has ever looked on the PS3, PC, or Xbox 360. The touch screen interface is elegant, the cards are drawn beautifully, and the art work is a real treat on the retinas. There’s a handy hint system to guide new players through the game, but the game is also very hands-off for the more experienced players. The difficulty level scales well, too, avoiding being too condescending while at the same time not being so difficult that anyone will feel hard done by.

Of course, the nature of a card game means there’s some randomness to it. The rules of Magic are nuanced enough that the more skilled player is likely to win, but there will always be some instances where the cards just don’t fall in your favour, or that at a critical moment you’ll draw the most hopeless card possible. For some this is going to be frustrating – especially as the progression through the campaign relies on being opponents in sequential order, and it means that in multiplayer there are going to be matchups where you want to quit out of frustration. 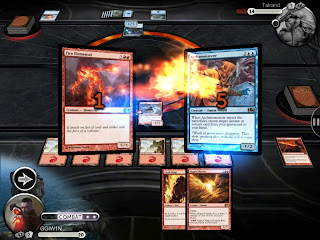 The card game industry in general has moved away from Magic’s vulnerable processes – games like Dominion and Ascension (the latter being also available on iPad) – leave far less of the result of the game up to luck, but just as Monopoly has been superseded by board games that rely only minimally on dice, it’s hard to resist the lure of the classics every once in a while.

The end result is a game that is premium priced by iPad standards, but well worth the investment. It’s another feather on the cap – proof positive that as much as the detractors would like to stick their heads in the sand and hope the “problem” goes away, the iPad is the real deal for gaming experiences. This is console-quality in every sense of the word.

Finally: A 3DS game that brought me tears of happiness

Star Wars The Old Republic get some Allies