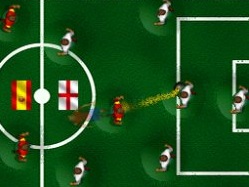 All across Europe, Euro 2012 will be on the minds of many people right now. With 16 different nations competing to become European Football champions, it’s one of the biggest sporting events of the year across the continent. So it’s no surprise to see Cinemax try and tie in “Goooooal Europa 2012” to the competition in the form of a Table Top Football simulation but unlike its inspiration, it’s completely devoid of entertainment.

To control the players, you press down on the player with the ball on the Touch Screen using the stylus and drag them back to get differing levels of power in your shot, be it to pass the ball to a nearby team member or take a shot down the pitch. The game’s physics are set up so that the players act like magnets to the ball and if they come within certain distance, they get caught up in the “magnetic” field of the player. It all controls fairly well and is rather simple to understand.

The game features three main game modes of gameplay, Classic, Arcade & Skills. Classic and Arcade have two modes within them, Quick Play and Tournament. Quick Play is just a simple match mode, while tournament sees the 16 teams are split between 4 groups, with the top two teams in each group advancing to the knock-out stages, going into the Quarter-Finals, Semi-Finals and then the Final round. 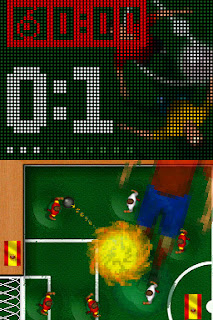 However, none of this can help save the game from its biggest flaw in that it’s particularly dull and just feels static half the time. Unlike real life versions of Table Top Football such as Subbuteo, where you can move players around by flicking them, here they always remain rooted in the same position so you could use the exact same strategy each time to defeat your opponent and the set-up stops you from being able to defend the ball in any capacity. It simply struggles to engage you and becomes boring fast, especially in classic mode and the achievements system (No doubt added for a sense of replay value) does little to help combat this.

Arcade mode tries to liven things in that respect with the addition of bombs. You can pass a Bomb ready to detonate and either try and score or pass it to one of the opposing players and destroy them instead. Skills, meanwhile, is a different take on the game as it’s comprised of a set of challenges that you must progress through, ranging from scoring 3 times in a row to passing a set number of times before scoring but neither of these are enough to save the game. Multiplayer only builds upon this feeling as you play using just one system and have to pass it between you, which makes for a tedious experience.

Graphically, the game presents itself at an average level with some good menu artwork and nice player models but they lack any vivid colour to help make the game visually appealing. As for the soundtrack though, the menu screens contain some generic techno piece but the gameplay itself is completely quiet outside of some stock sound effects, which only add to the dull atmosphere of the game.

Overall, this is a poor attempt at bringing Table Top Football to the console. While the physics of the game work and it controls fairly well, the game’s biggest problem is that it’s just not very entertaining and you’ll struggle to find any reason to stick to it. Bottom line is that if you’re desperate for a Football fix on the DS, look elsewhere. This just isn’t worth the time or money.

Star Wars The Old Republic get some Allies

Interview: On why the Apple App store drove an Aussie indie out of business