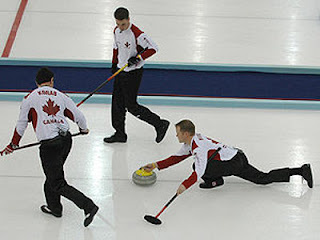 Curling is a not a sport you often see adapted into a video game. While it does occasionally appear on platforms, it usually comes as part of a set of mini-games as opposed to an independent release. This makes Cypronia’s Curling Super Championship a rather unique entry to the DSiWare library in that respect and while it’s a respectable effort, it’s also a rather dull one at times unfortunately.

The rules of Curling are quite simple. Your team has to slide a heavy granite stone (known simply as Rocks) down an alley of Ice, where a target is placed at the end & you simply have to get as close to the centre of the target as possible. You also have two people with brushes down the sides of the alley to help you navigate the rock left and right, as well as help slow it down, although in the game only the brushes appear. They won’t save the worst of shots but they certainly help with minor alterations to make that good shot become a great one.

In the game, this is all controlled via the stylus. You move the stylus to build up power for your shot, releasing it before you come into contact with the red line and once it’s out in play, you then use it to control the brushes. You alter distance by rubbing to the left of right or your rock, slow it down by brushing right in front of it or from a small distance to increase speed. 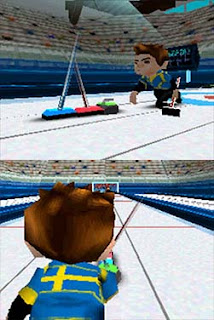 Both teams get eight rocks in a round and you win a point each time one of them is closer to the target than the opposing team. But rocks aren’t stuck in place once they land, you can smash one of yours into one of the oppositions, which give the game more of a tactical feel and the physics for this are well implemented, particularly when handling collisions.

The game works fine in terms of gameplay and has translated well to the DS but the AI opponents can be rather tough at times, especially on harder difficulties. They’re not impossible to beat but it feels better balanced in easy mode. However, the game’s biggest problem is that it’s a game better suited to short playthroughs, as it does start to feel rather repetitive after a while on your own. Multiplayer mode does help make the game a bit more interesting in this aspect, which also supports DS Download Play for up to two players but even then, the games do feel like they are too limited for long-term fun.

This is not helped by the fact that in all four of its modes – Championship, Quick Match, Hot Seat and Multiplayer – the rules are exactly the same each time, you can’t do a short five minute match or have any sort of customization options for the rules at all, which is rather irritating. There are unlockable achievements in the game, which help add a bit of replay value but don’t amount for much in the long run.

On the presentation side, the game takes a turn for the worse, most notably with the 3D graphics used, which are rather poor even by DSiWare standards. As for the soundtrack, there’s not much to tell here, it’s pretty basic and you’ll continue to here the same looping pieces of music and sound effects over and over again.

Overall, Curling Super Championship is not a bad effort by Cypronia to bring a rather niche sport to the console but it is certainly a flawed one. While its better in short bursts, it does struggle to keep you engaged after a while, and is not helped by poor presentation. Unless you’re already a curling fan (so… Swedish? – ed), you may be better off spending your points elsewhere.