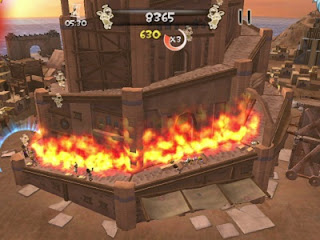 Babel Rising is a cute little take on deific genocide. What is essentially a tower defence game is made weirdly compelling by the simple fact that you’re taking the role of a God, slaughtering people for daring to build a tower.

There’s not really any explanation for why you’re smiting these people, you just are. Perhaps for worshipping a different deity? Regardless for the reason, though, the little human folk run around a tower scaffolding, slowly building it up, and it’s your job to kill these people before they can build it up to the top.

There’s a number of primal forces at your disposal to do that, from the basics (lobbing rocks down to thwonk a human on the head, tossing a small fireball down to burn some of the scaffolding), through to the more impressive feats of godly might (a giant ball that rolls down the tower destroying any hapless enough to get in the way). There’s two different ways to play – there’s a story mode, where the game has a predetermined condition for victory, while the endless score attack is all about destroying for as long as possible before the overwhelming numbers put that last piece into the tower and end the game. 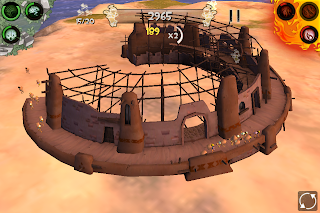 In either mode, when it’s at its best, Babel Rising is a frantic, mildly satisfying game that is sadistically charming. The little ant men are somehow fun to crush and maim, and the visual presentation of the game is as fine as any iPhone or iPad game you’ll be playing any time soon. Sadly, the game isn’t at its best as often as it should be. The great problem this game faces is its patchy touch screen recognition. Everything is controlled via taps and swipes, and it’s difficult to be precise with any of them. One of the most useful abilities, for example, requires you to hold down a finger on the touch screen, and then use the other finger to swipe across the area where you want to fell humans. If it works, it can take out a large cluster of the little ant-men. When it doesn’t work, the area of effect will be restricted to some useless spot, the people will run on by unharmed and it takes a good few seconds for that power to refresh itself.

That’s frustrating, to say the least. I can appreciate the downtimes, as they add a layer of strategy to the game – do you use your most powerful abilities now, or wait a few more seconds to try and take out a larger group? It’s a good idea, but for it to work, it’s kind of important for the game to properly recognise gestures, and it just doesn’t. To make this matter worse, I experienced these problems playing on the iPad, so I can only imagine the horror of trying to be accurate on the iPhone’s small screen. 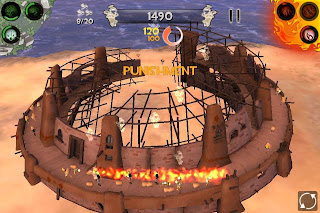 I’m also a little put off by the way microtransactions work. The game gifts players a small amount of virtual currency every day they log in to play (a little like a Facebook game), and that can be used to buy powerful one-use items and spells that are necessary to do well at the high difficulty levels. That “free” cash is rather stingy, however, making it necessary for the more casual players to hand over some real cash. I don’t mind when free games do this, or when it’s a soft touch for a paid game, but when it’s a paid game, and then stingy in an attempt to force people to fork over more cash, I’m less amused.

But, flaws aside, Babel is still a weirdly compelling title, and a relatively fresh take on the tower defence genre. It’s just one that’s not for the easily frustrated, as top scores will be ruined by those touch screen controls.

Xbox 360 to miss out on Clan of Champions