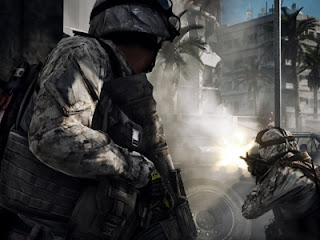 Battlefield 3 is the latest installment in the very popular Battlefield series by DICE. Most compare it to the equally as popular Call of Duty series, however they are both very different. The multiplayer, (arguably the most important aspect of this game), is a one of a kind and allows for the player to fully immerse themselves in the game.

Introduced to Battlefield 3 recently was its Premium service. The service provides to those who purchase it all DLC packs that will be released, which judging by the calendar will give players a good year of Battlefield action. Additionally, all who become Premium members will gain two weeks early access to the DLC packs. Periodically, there will also be events that allow for players to gain double experience, as well as videos and guides provided. If you haven’t bought any of the DLC that has been released yet, for the five packs alone it is well worth your money. Of course, Digitally Downloaded will be providing reviews of future DLC packs when they get released.

The campaign is set within 2014. Interrogated by American officials, the story is told in retrospect. I want to say I was interested, but really I wasn’t. It’s all the same. Run for a little bit. Explosion. Shoot all the enemies. Rinse and repeat. Luckily, the amazing Frostbite engine somewhat makes the environment experience a different and unexpected one every time. The destructible cover breaks down with every shot. What may be safe one second may be a death trap another. 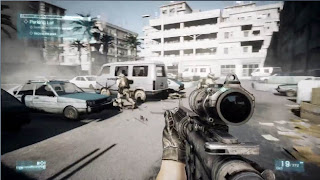 The multiplayer though is where this game really shines. It’s simply amazing what Battlefield is able to produce. Sadly, the console versions of the game lose the 64-player matches, but a full game is still a blast to play. In most game modes, within the two teams there are squads. You are able to play solo but it is encouraged to work as a team. Squad members are able to spawn near one another, assuming that they haven’t been shot down themselves. As long as one member can stay alive, the group can continually re-group and assist in achieving their desired outcome.

There are four classes within Battlefield 3. The Assault class fights with assault rifles, whilst also being the medic for the team. Not only can they provide med-packs, but they can also revive members who have been shot and haven’t respawned yet. One of the issues that have been fixed from prior games is that now, once revived, you can choose to re-spawn rather than being forced to accept it. The support class focuses on light weaponry, as well as providing ammunition. Additionally, he has an arsenal that is capable of destroying enemy ground and air units. The Engineer is best suited to vehicles, capable of repairing yours as well as damaging the enemies. The Recon class is best suited to snipers. They can also be used to spot the enemy as well as placing spawn beacons. 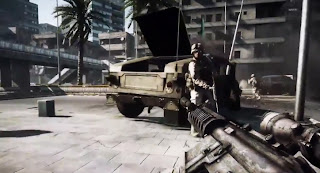 In Battlefield 3, you’re rewarded for playing the classes you’re good with. If you main with Recon, not only will you increase your rank but you will gain additional weaponry in the Recon class. Although most like to switch around given the circumstance, if you spend your time with one class, you will find yourself underpowered when moving to another.

A problem that arises with the squad system, at least on PS3, is that not a lot of users utilize the voice-chat. It won’t ruin your game, but the experience may be easier, and a lot more enjoyable if your whole squad used it (given the bile most kids blurt out on these services, this is quite possibly a good thing… – ed). 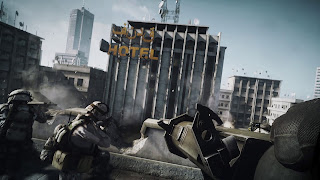 There are a bunch of game modes in Battlefield 3, and your choices are expanding thanks to DLC packs that are being released. Conquest is your bread and butter. Two teams fight for the control of control points or flags. Whenever a team controls a flag, team members can spawn at that location. What determines who wins are the tickets held by each team. Every time someone respawns they lose a ticket. Revives don’t count (so all of the Assault class should have their defibrillator equipped). However, when one team controls a majority of flags the other team begins to bleed tickets.

The conquest mode has been enhanced through the two latest DLC installments, Back To Karkand and the latest Close Quarters with Conquest Assault and Conquest Domination respectively. Assault sees one team placed as attackers and one as defenders. At the start of the match the defenders have all flags captured, and the attackers (with an increased amount of tickets) has to try and capture the points. Domination matches occur in maps with narrow passageways, reminiscent of old first person shooters such as GoldenEye on the Nintendo 64. Flags capture very quickly (only takes a few seconds with one player opposed to about twenty), however the flags are closely placed together so if you do happen to capture all three on the map it won’t be for long. 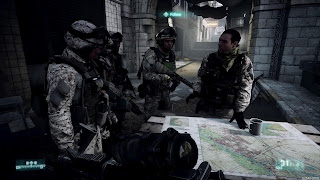 First introduced in Bad Company, Rush has now become a staple in Battlefield. One team is attacking while the other defends two different ‘M-COM’ stations. Each match is spread over a few stages. After the attackers take two stations, they move forward and the defenders move backwards. It may sound simple, but a good defense will find the choke points in each map, holding the attackers back. It will take a good squad, and good communication to break through and take the objective.

The Frostbite engine, as mentioned earlier, really shines in multiplayer. Your environment is constantly changing, and for most of the times it’s not for the better. Holes emerge in walls so if you’re not careful your entire squad can be flanked. 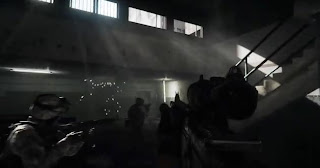 The recent DLC pack, Close Quarters is such a great addition to the game. Most of the maps have large expansive areas with some narrow corridors which is all fun, but Close Quarters brings me back to my roots. As I mentioned earlier, the small corridors with lots of corners is just a shining a nostalgic spotlight of past first-person-shooters.

With it you’re given the newest mode Gun Master. All players start of with a pistol, and through killing others they are able to upgrade their weapon, until they get to the knife. A kill with that and you win the game. It’s not an original concept, inspired from Counterstrike and Call of Duty, but it’s still fun. It only takes place on the Close Quarter maps, which tight corners leads to a lot of getting shot in the back.

Battlefield 3 also offers a co-op campaign, separate to the single-player campaign, however I was unable to check it out for this review.

Battlefield 3 is just a great game. Its single player could be improved, but a lot of people wouldn’t haven even played through the entire campaign. With its squad-based multiplayer, and its fun game modes it’s hard to find genuine, serious, gameplay flaws. Any shooter fan should pick this up. Additionally, the Premium service is a great purchase, for players new and old. It will provide months worth of new content at a great price.