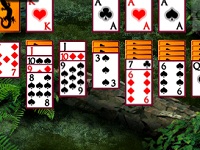 I’m not quite sure what the point of 3D Solitaire is. I mean, it’s a card game – perhaps the most basic popular card game of all time – and I’m not sure anyone was hanging out for a 3D take on it when the 3DS was announced. Card games are 2D in real life, for crissakes.

That said, 3D Solitaire does a good job of turning a 2D game into a relaxing 3D experience. Just about everyone has played Solitaire before, so there’s no point in going over how the game works, but there’s two different versions of it on offer here – one easier, and one is what I would guess could be called “hardcore” – the real deal of 3 card Klondike.

The game plays as expected, and is very no frills – there’s a leaderboard (which is rendered pretty redundant when you consider that there’s a lot of random luck involved in this game) but no statistics, and minimal unlocks. There are three different graphical backgrounds – two of which have to be earned – and the end reward for doing well at the game is the ability to use photos from your 3DS camera as the background. It’s a little pointless that they’re locked away though, because everything is earned within 30 minutes of playing. 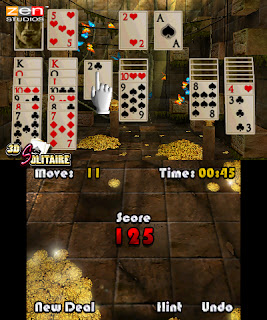 Those backgrounds are the real highlight of the package and create a relaxing ambiance that helps elevate this game over the Solitaire game available on DSiWare. The cards look crisp and animation is used sparsely but to good effect. The music complements the visuals nicely. Subtle as it is, 3D Solitaire is one of the nicest looking games available for download on the eShop.

Though it’s hard to mess up a game of Solitaire, there is a fundamental problem here that is more to do with the hardware than anything else. The top screen, being the 3D screen, is not a touch screen. The bottom screen, being a touch screen and better suited for card games, is not in 3D. So in the end the best selling point for this game is hampered by the inappropriateness of the control system.

It’s inexpensive and it plays a good game of Solitaire. The interface is better with Nintendo’s DSiWare equivalent game (which is also a little cheaper), but the visual presentation of the game in 3D is enough to put it over the line for me.

Now I just have to wonder what’s the next completely pointless game that someone will shoehorn into 3D.