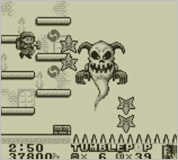 Tumble Pop is the kind of game the Game Boy really excelled at. It’s a simple, joyous little arcade game, and while it’s a title that’s largely been forgotten to history, it’s a game that is worth looking at again now.

Released back in 1993, it’s a simple take on the whole Ghostbusters concept: strap a spiritual vacuum cleaner on the back of a hero and set him to work on various ghouls and ghosts. In this case the levels are small, enclosed 2D platform stages – a bit like the classic Bubble Trouble in construction. For each stage, you’ll need to defeat all the enemies (by either sucking them into the vacuum cleaner or spitting them back out into other ghosts), within a time limit. Do so and it’s on to the next level.

There’s a handful of powerups that can also be grabbed that offer the ability to move faster, or temporary invincibility. These resources are limited, but they’ll need to be used to get through some of the later levels, because the difficulty curve does ramp quickly. These power ups are dropped randomly from enemies or picked up through some (rather dull) minigames.

There’s eight worlds that are split up a little like a modern Mario game, as a map with a series of nodes. There’s a handful of branching paths so players feel like they’ve got a little bit of control over what’s going on, and there’s an overworld map that lets you pick the order in which you tackle the worlds.

Then there’s the bosses, which are a little too difficult and a little too bland for my liking. Still, they do the job in terms of providing a different kind of challenge to the main game. Thanks to an excess of levels, Tumble Pop would feel like a grind were it not for those boss battles breaking things up.

With a charming visual style, and effective use of the Game Boy’s limited sound power, Tumble Pop also looks like the kind of game to give retro fans a nostalgic shiver. While there’s no end to arcade-style platformers on the Virtual Console already, Tumble Pop sits in the upper range in terms of sheer value for money.