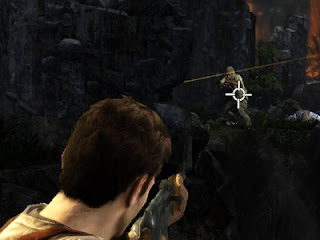 Treasure hunter, expert climber, fighter, even heartthrob? Pretty much all the characteristics Nathan Drake embodies. His first outing onto a portable device brings with it the same cinematic action sequences that are present on the console games whilst also showing off the power of the Vita.

There is a story in Golden Abyss, I think. For the first ten or so chapters, all I knew that was happening was that I was in a jungle looking for something. Sadly, the engaging story that is present in other Uncharted games severely lacks here and for me, the lack of a story right from the get go is pretty disappointing. I never got the grand sense of adventure like I did in the other games, but rather I’m either climbing ancient ruins or stomping around in a jungle somewhere.

Though, whatever Golden Abyss lacks in story, boy does it make up for it in action. Much like its console counterparts, every ledge can crumble when you grab onto it, every truck is one bullet away from an explosion. Although sometimes predictable, these moments are still breathtaking, especially considering how good they look on the Vita’s screen. 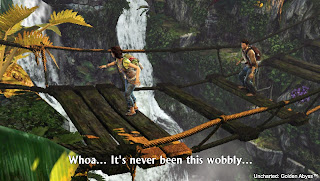 And this is where my major love sits. It simply looks beautiful. I definitely took the advantage to take in every environment in this game, and whenever I entered a new locale I would spend a few minutes looking at the tiny details as well as the grand beauty of it all. What adds to the aesthetics is the characters themselves. In each face there is a great amount of detail, as each character shows emotion in their faces. It may seem like a little addition but it works wonders to keep the viewer engaged in what is a generic adventure story.

What was really surprising was the gunplay, as it work almost exactly as it does on the console games. The cover system works well and most of the time it blends into your surroundings without being obvious. The guns all feel really good too, especially the shotguns and the rifles. Additionally, you can still take out enemies behind cover without anybody noticing you, though sometimes, when you would expect to be seen they simply turn a blind eye. 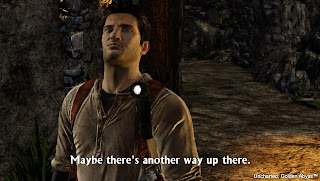 That’s pretty much where the positives end with the combat. If you get into close quarters with an enemy you can whip out the fists and take them down the old fashioned way. You can hit enemies by either pressing square or a virtual button on screen, however there are some moments where you’re required to swipe a certain way on the touchscreen, which severely interrupts the flow of combat. Furthermore, you cannot throw back grenades unlike the other Uncharted games.

What was most disappointing about the combat were how generic the goons were. Uncharted is famous for the amount of bullets you have to feed an armoured thug before he falls to the ground, but here there is little to no diversity. I’d never thought I’d say this but I missed the bullet hungry enemies that were a pain to kill during a large shootout. 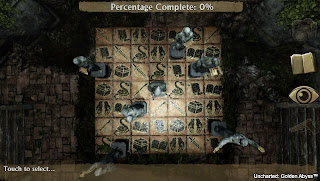 Another disappointing area of the game were in the puzzles. Most consisted on either rotating an object using the rear pad and cleaning it off or doing a jigsaw puzzle. There wasn’t anything mind-bending that took some effort to think of how to complete it. One specific example was that you had to place eight different statues on an eight by eight grid. Each tile had an icon on it, and you had to place the statues between two of its icons. I rejoiced when the mere premise of a somewhat difficult puzzle emerged, but they still managed to dumb it down.

It’s a shame that Golden Abyss came out so early in the Vita’s life, as it is very gimmicky. Although most actions aren’t dependent on the touchscreen, it would have been nice to at least have more diversity in the way it is used. 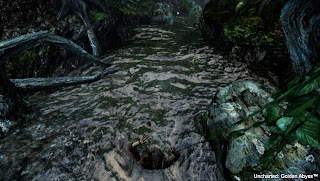 If you’re a perfectionist you will have loads to do in Golden Abyss. There are treasures galore, as well as the added photographs and rubbings. The treasures lack the charm that was present in the consoles, as you are mostly picking up the same thing.

I think the major problems with Uncharted: Golden Abyss arose due to the fact I have played the console versions. By itself it is an good game, however it just lacks what makes the series so much fun. Perhaps it’s due to the fact that it was developed by Bend Studios and not Naughty Dog. If you’re a newcomer, this will be an excellent springboard into the series, though veterans will most likely wish to stick to the console releases.

Crytek CEO: “The future is online and free-to-play”