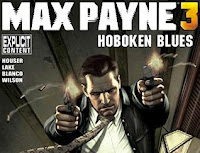 The second issue of the Max Payne limited series from Marvel comics is heading to digital outlets soon.

For those wondering just what-the-what the ‘Hoboken Blues’ are,  apparently you get ’em when your life goes down the tubes and you drink too much.

This particular malady also leads to crummy bars filled with young punks who use too much hair gel.

“Hoboken Blues” further explores Max’s fractured psyche as he recalls the circumstances of his life that led up to his confrontation with Tony DeMarco in the Hoboken dive bar at the onset of Chapter 4 in Max Payne 3. Max’s time as a New York City cop, his early days on the force, meeting his wife and his ultimate dismissal from the NYPD in the wake of the events that transpired in Max Payne 2: The Fall of Max Payne are all featured in this new issue, again written by Dan Houser and Remedy’s Sam Lake, with cover art by Jorge Molina and pencils and inks by Fernando Blanco.

Max Payne 3 issue #2 is the penultimate chapter in the miniseries. The book puts a hit on the Max Payne 3 Official Site on June 12th and will be coming to other storefronts ‘soon’ after. However you read it though, you can’t beat the price- it’s free.

Free comic books, now there’s an offer nobody can refuse.

It’s Christmas in June on the PSN Update