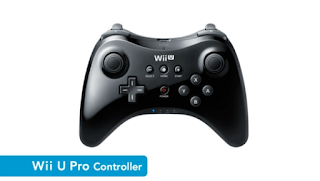 As many would have noticed, Nintendo has run its own pre-E3 show to show off a couple of neat things before the main event starts tomorrow. There’s some really great stuff in there – the Miiverse, especially, looks like a great take on a gaming social network and precisely what Nintendo needed to do with its online. Overall, the presentation has me excited to see what Nintendo will reveal over the course of E3.

But one bit of news from the show greatly concerned me. It might turn out to be nothing more than my own paranoia, but that Wii U Pro Controller is a terrible idea.

It’s being positioned as an alternative way to experience Wii U games, for those who don’t want to use the tablet controller. It has the same number of buttons and a similar layout, it just lacks the tablet screen in the middle.

And that’s the problem. Is that a concession by Nintendo that, like motion controlling, not everyone is going to want to play with that tablet screen? Is that Nintendo’s answer, to provide players with a cop-out?

One of two things are going to happen with this fragmented approach to hardware. 1) With a rare few exceptions, developers don’t make the tablet screen a fundamental part of the gameplay experience, as they don’t want to annoy the folks who only want to use the Wii U Pro Controller, and thus lose sales. 2) The Wii U Pro Controller becomes a useless piece of plastic for the majority of Wii U games, and that annoys anyone who bought it.

Either way, it seems Nintendo has not learned its lesson when it comes to hardware – getting it right the first time and sticking to it is infinitely preferable to releasing add-ons and accessories to act as hardware “patches.” The fact that this “patch” has been announced before the Wii U is even released does not bode well for Nintendo’s confidence that people will want to use the touch screen controller.

The reason the Classic Controller Pro on the Wii was so great was because it added more buttons to allow people to play the Wii in a very different way to motion controls + nunchuck. Removing functionality with this new controller, however, is the very definition of counter-productive.

I am very interested in hearing from other people what they think of this hardware announcement. Be civil, but sound out in the comments below!