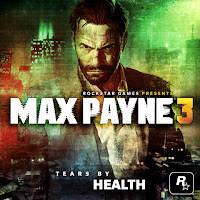 How about a little musical accompaniment to go along with all that hard boiled, slo-mo gunplay?

The third installment of the storied Max Payne series hit stores today and with it’s arrival, so comes the title track for the game’s soundtrack- TEARS by the band HEALTH.

Apparently, fans have been asking for the release since the tune was paired alongside the trailer a few weeks ago. Honestly? It’s pretty cool.

HEALTH’s unique blend of rock, powerful drums and electronic soundscapes lends itself perfectly to the score for the game. Taking influences from Brazil, Max’s native New York and the themes of the original games, HEALTH have put together a fantastic soundtrack that perfectly embodies the tone and the atmosphere of Max Payne 3. Distinctive arrangements unique to each level accompany Max on his journey through the game’s locations, perfectly framing the game’s epic action sequences and the dark and gritty story.