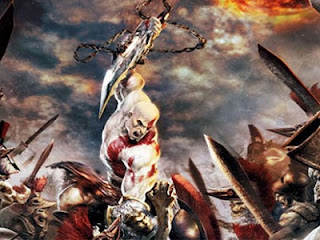 Edit: Changed the headline to prevent confusion between God of War 4 and… God of War 4. I mean, really, does anyone think that Ascension is anything but God of War 4? But yes, we must be accurate in this business.

So, the newest casualty of the games industry obsession with cramming multiplayer into everything is God of War 4. Once again I’m left shaking my head, disappointed that the developers are being forced to crap square blocks into circular holes.

Whilst I like a good multiplayer game as much as the next person – Birds of Steel being my current addiction – it needs to have a point otherwise, funnily enough, it feels like a pointless attempt to force players to play ball with online passes and the like.

By tying achievements (usually) to the multiplayer game the developers do try and force players to get involved in the multiplayer, but the fact of the matter is that some games are better experiences solo. With a solo game the developer has control over the atmosphere, the pacing and the experience of a game. It’s more linear, of course, but it’s more reliable and the quality control is higher. The amount of control developers have over irritating teenagers who still think it’s cool to swear and deliberately try and exploit a game is minimal, after all.

Single player games also don’t require an audience to keep the game alive. There is a finite number of gamers out there, and a finite number of those take their games online. The result is some communities that are dead on arrival – I can count the number of times I’ve even managed to find a match in Goldeneye 007 Reloaded on one hand. That was at release time in Australia. Birds Of Steel has already shrunk down to a tiny community of the hardcore. If you’re not an AAA-list game from Activision, Sony, EA or Nintendo, you’re not going to get a large enough community to make a great multiplayer experience.

Not that the size of the community is likely to be a problem with God of War 4 (though there are most certainly going to be irritating people in abundance on the servers). The problem with God of War is that it’s such a perfectly crafted single player experience, with a strong definable lead character and an epic world. Kratos isn’t even in the multiplayer game, and rather than epic, multiplayer battle arenas are just that, arenas. It runs completely against the very point of the series! The resource drain implementing a multiplayer mode is going to inevitably going to impact on the single player game. Multiplayer doesn’t just happen, it always comes at the expense (to a lesser or greater degree) of the single player game, and I’m personally sick of single player games being used as glorified tutorials for the multiplayer that the developers desperately want people involved in.

The reason Dark/ Demon’s Souls and Journey have minimal multiplayer is as much a consequence of the developers working around an inherent problem with multiplayer – that is, the obnoxious people that play them, and the lack of integration with the single player experience – and have come up with a creative solution to them. That doesn’t work for every game, though, and for many games I would suggest rather than shoehorn in a multiplayer mode, how’s about doing something radical and putting the resources into fine tuning the single player game more?

Are you looking forward to God of War multiplayer action, or would you have preferred this franchise remain single player? Let us know in the comments below!

Is 2012 already the best year ever for games?