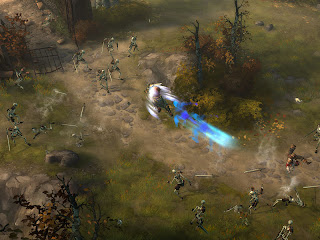 Just a quick note to point out something that is, frankly, utterly embarrassing for the gaming community: Diablo III’s Metacritic score (user ratings) is sitting at 3.5/10.

Before I go on, I do want to clarify: there are some good, genuine complaints raised by some of those user reviews. And nor, based on what I’ve seen, read and heard from people that have played the game, do I think it’s a 10/ 10 game. The reasonable people sit between the 6/10 and 9/10 range, which is as I expected.

And in the interest of full disclosure: I don’t have Diablo III. There is very little point in spending my time playing it right now when the review would get lost amongst the mass of other professional Website reviews. We will have a review for Diablo III, never fear! But it will be in a few weeks when we’ve all had a chance to digest the game properly.

I also didn’t buy Diablo III at launch because I knew something would go wrong. The improbability of a perfect launch for a game of that size and marketing scope is such that any rational person should have gone in expecting that.

But again I seem to have overestimated humanity and indeed we’ve got a lot of people slamming Diablo III because they can’t log in (and thus play) the game right now. It sucks certainly that you woke up on Christmas day and there were no presents under the tree, but that’s only because your parents were having a bit of a joke and there’s a really freaking awesome present hidden away until after lunch.

Diablo III’s problems are problems that anyone would have realised is going to be fixed, and soon. You don’t have a game that is broken, you have a game that is simply too popular to possibly be glitch free right now. It’s overloaded, simple as that. But to all those those many people who gave it 0/10 score on Metacritic for that reason: That knee jerk and utterly childish reaction is part of a permanent discussion that may well have real ramifications – on Blizzard as a business and the people that worked really flipping hard on making this game for you.

So well done, folks. You’ve tainted the game release of the year, and all because you’re so entitled that you quite literally spat a dummy over not being able to play right now.

Review: Defender of the Crown (iPhone)