A week ago we posted a news story about how Pwnee Studios’s first game, titled Cloudberry Kingdom, was currently undergoing a Kickstarter project in order to raise money to improve their game. We were able to get an interview with Pwnee Studios about Cloudberry Kingdom and ask about some of the other things surrounding the game, specifically some of the aspects of the game/development that have been vague.

Digitally Downloaded (DD): Can you tell us about how Pwnee Studios and Cloudberry Kingdom came to be?

TJ Lutz, Cloudberry Kingdom Team Lead (TL): Cloudberry started off as a mathematical research project. I was sitting around wondering whether it was possible to randomly generate Mario levels. It seemed like a hard problem. Much harder than generating a dungeon in Diablo. You’ve got to make sure blocks aren’t too far apart, worry about timing issues, gravity, friction, all the physics. It gets really messy trying to ensure your level is actually possible to beat. But one day while procrastinating on my real research (I was a mathematician back in the day) I struck on a great way to program an AI to do the job. I dropped everything to bring it to life, and haven’t looked back since.

DD: Not to sound accusatory, but from what I have played of the current Steam beta of Cloudberry Kingdom the game appears to be in a “Releasable” state. Why delay the game and go down the Kickstarter route?

TL: At some point, after spending three years on a project, you’ve got to ask yourself, “is this good enough? Or do I want to double down and make it explode?” We decided to double down. We still have a lot of ideas in mind that we are trying to squeeze into the game, and we don’t want to release without feeling like the game is at its full potential. We think the new art we’re working on will be totally worth the wait.

DD: The independent video game scene has had many “Procedurally Generated” games in the past few years, from Minecraft to Terraria to A Valley Without Wind. Do you think that games with procedurally generated content could become popular among the video game industry at large or do you think procedural generation will remain an indie trend that may-or-may-not last?

TL: Procedural content has a fairly healthy history in the game industry, especially for dungeon crawlers. There are some places where procedural content makes a lot of sense, like world building, and some places where you really need to push hard to get an algorithm that works well. Spore was probably the game with the most impressive procedural algorithms. Nailing the animations must have taken some real innovation. When we first started working on our AI it wasn’t at all clear that there was a way to make it work. That’s a risky venture. That said, I think procedural content is here to stay, but I don’t see it ever becoming a must-have technology.

DD: One of the least expected aspects about this game is that it is the first game to be confirmed for Nintendo’s Wii U online store. Can you tell us about how this came to be and how your relations with Nintendo have gone?* 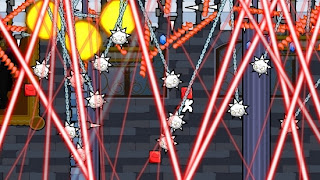 TL: Are we really? I didn’t know that! We actually wanted to do a DS port of Cloudberry, but when we started talking to Nintendo they sold us on doing a Wii U version instead. Nintendo has been super accommodating to work with and they’ve been very positive about the game from the get-go. Personally I’m looking forward to bringing a bit of the old school platformer feel back to the folks that first popularised it.

DD: If you had to answer, what food and beverage combo would you say is most similar to Cloudberry Kingdom and why?

TL: Pop rocks and diet coke. It is both intense and refreshing, but at the same time there is a distinct chance that you will suffer irreparable internal hemorrhaging.

The Cloudberry Kingdom Kickstarter page currently has a little over $11,000 of its goal of $20,000 and there is a week left before the project cuts off funding.

*This is untrue. Toki Tori 2 was the first confirmed game for Nintendo’s Wii U online digital store. This mess-up is entirely my fault. — V8 Ninja