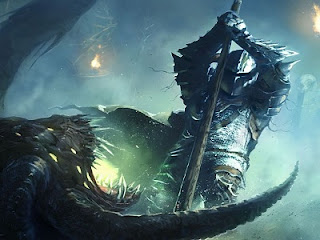 Avernum: Escape from the Pit HD is the second Spiderweb Software game to hit the iPad and it is a real highlight for RPGs on Apple’s platform. It’s actually a remake of one of Spiderweb’s most beloved classic RPGs (originally released way back in 1995) with some tweaking to bring it in line with more modern RPG sensibilities, which makes it an ideal starting point for anyone who hasn’t experienced on of Jeff Vogel’s RPGs previously.

Like Avadon before it, Avernum is a fairly cheap download and offers a full-featured, epic quest with an intriguing plot and some first-class writing. The game’s premise is more than a little interesting, and quite substantially different to what many RPG fans would have seen before. Players take control of a party of four heroes who have been banished to a vast underground world for committing a crime against the surface Empire. There’s an entire nation has been built down there as the criminals (rightly or wrongly) struggle to eke out an existence in a very hostile world.

This premise does a couple of interesting things to how the game plays out beyond providing what amounts to one giant, hostile dungeon to explore. The big difference is that Avernum is a very low power RPG as the inhabitants of the world lack the resources to make what other games take for granted. Magic items are rare and precious. In fact, with a lack of crafting materials, steel armour and weapons is scarce enough. This means that finding good loot is in itself an achievement and players need to make better use of latent character skills rather than simply rely on having the best stuff. It’s a very different tone of RPG compared to the modern trends of mega-power equipment and loot drops and it’s a refreshing direction to take. 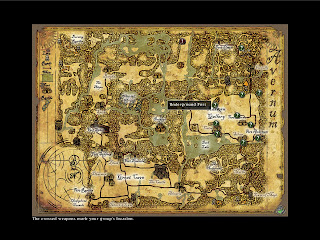 The story itself is also a far darker one than most would be used to in the high-fantasy epics that dominate the genre. Towns are crumbling, people are struggling to survive eating mushroom flour bread and lizard meat, and everyone’s skin is deathly pale from having not seen sunlight since being banished. When players act heroic, then, it has a greater resonance. Avernum works a bit like From Software’s Souls games in that regard; when the odds are stacked right against you, changing things for the better is a heroic reward.

Jeff Vogel has always been known for writing his RPGs well, and Avernum is no different. Characters have believable motivations, and the text descriptions that pop up on entering a new city, cavern or dungeon does a brilliant job of setting the scene. There’s no voice acting, and the graphics are incredibly basic; Vogel makes his RPGs on a shoestring budget so they rely heavily on the quality of the words the player reads to be compelling. Indeed, that in itself is a nice change from the cinematic experience bigger-budget RPGs shoot for; all the text makes playing the games more like a pen-and-paper RPG experience than a “computer game”. As a Dungeons & Dragons player of old there’s a nice bit of nostalgia wrapped up in playing these games because of that. The offshoot is that players need to be a bit more patient and switched on to fully appreciate the Avernum. You make your own story here and it’s up to you to keep track of what’s going on. 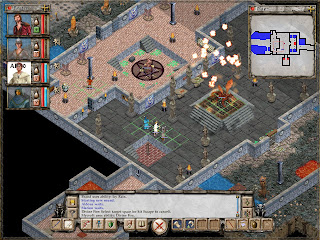 That’s not to say that the game looks ugly in that graphical simplicity though. The remake of Avernum has brought with it the same sprite work that was behind Avadon. As such the game looks like a basic version of Baldur’s Gate games, which is a fine aesthetic direction to take, and one that most RPG veterans will be comfortable with. Newcomers will likely struggle a bit more, especially now they’ve likely played Skyrim and Kingdoms of Amalur, but over time there’s an elegance to the basic visuals that most should appreciate. The loading screens and maps also have some gorgeously detailed art work which helps to set the scene and remind people that this is indeed a “new” game.

The gameplay itself is very much a traditional western-style RPG. It’s largely non-linear with a lot of side quests to distract players away from the main storyline. The party of four heroes can be taken from a range of classes, and players have complete control over their statistics as they level up. There’s a skill tree to mess around with and while it’s not as complex as, say, Skyrim, it does enough to give players full control over the strengths and weaknesses of their heroes and no two groups of heroes will be the same as one another. 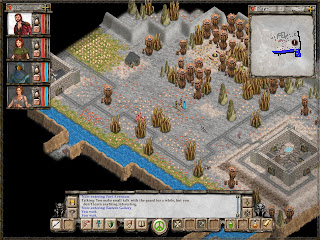 Combat is a strategic turn-based affair. Heroes take their turn moving around the environment, positioning themselves and attacking enemies, and then the bad guys have their turn. There’s a bit of strategy involved as combatants can’t run past one another; attempting to do so will cause the character to stop dead in its tracks. In this way a well-armoured fighter can protect the fragile wizard behind him/ her by taking control of a chokepoint.

The one slight flaw with the system is a result of how small the characters are. Tapping on them, and then selecting the exact place to move them to is difficult at times, especially when the screen gets busy with lots of enemies around. On the lower difficulty settings this is no big deal, but on the hard settings a misstep can mean death for the entire party.

Other than that, this is a superb iPad port of one of Spiderweb’s very finest moments. It might not be as well known as other classic RPGsiPad presence helps build the fan base. After all, there are five more Avernum RPGs that are just dying for a remake.

Double Dragon returns in style on XBLA and PSN

Magic the Gathering: Duals of the Planeswalkers 2013 confirmed for iPad