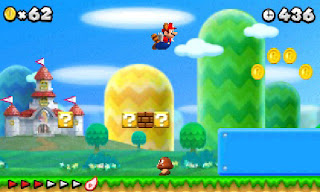 The 3DS eShop has a handful of unique titles, but it lacks any retail games at the moment. That’s all going to change this August, as Nintendo announced plans for New Super Mario Bros. 2 to hit the eShop service as soon as it launches in physical form.
What’s the best part of the news for digital fans? New Super Mario Bros. 2 won’t be the only title to receive this treatment.

“As I said earlier today, we announced during the latest Nintendo Direct that the completely new 2D Mario game, “New Super Mario Bros. 2,” will be launched in August this year.

With this software, we will initiate the so-called digital download sales, or the digital distribution of packaged software, in addition to the sales of packaged software through the existing distribution channels. In principle, starting from this software, the company will offer the software titles that Nintendo itself publishes in both packaged and digital download formats so that our consumers can choose the way to purchase them.“

In addition to 3DS releases, Wii U games will be digitally downloadable from as soon the console launches this holiday season.

In other eShop news, two new Pokemon applications will be available around the launch period of Pokemon Black 2 and White 2; Pokémon AR Searcher and Pokémon Zenkokuzukan Pro (Japanese titles).
Share this

Yes, Nintendo should be making smartphone and tablet games