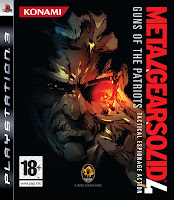 The Smithsonian American Art Museum will soon be debuting ‘The Art of Videogames’ and the legendary Metal Gear franchise is taking part.

Konami announced today that scenes and video clips from Metal Gear, Metal Gear Solid 2: Sons of Liberty, and Metal Gear Solid 4: Guns of the Patriots will all be representing the 25 year old franchise at the museum’s exhibit.

For the first METAL GEAR SOLID, Mr. Kojima created a digital masterpiece by joining cinematic, fully-voiced cut scenes with groundbreaking 3D gameplay to create an all-new kind of genre often referred to as Tactical Espionage Action, adding the element of stealth to action shooters. METAL GEAR SOLID 2: SONS OF LIBERTY continues to explore the original story and expand upon the genre from the original title. Snake returns along with Foxhound’s new recruit, Raiden, to stop a deadly high-tech weapon from falling into the hands of a highly elite resistance group called Dead Cell. Familiar faces like Revolver Ocelot make an appearance as the player struggles to stop a terrifying new war machine known as Metal Gear Ray. This time around, enemies are more aware and agile, so players must use the skills of stealth, weaponry and counter-terrorism to their fullest in order to fight off the powers competing for destruction and domination.

METAL GEAR SOLID 4: GUNS OF THE PATRIOTS marked the final installment in the legendary saga of Solid Snake. Armed with new equipment and abilities, Snake had to shift the tides of war into his favor, using the chaos of the battlefield to infiltrate deep into enemy territory. In his globetrotting final mission, Snake must sneak deep into enemy locations in the Middle East, South America and other corners of the earth to foil Liquid Ocelot’s plans for global insurrection.

The Metal Gear series really has become of the greats of the videogame world and Snake is easily one of the most recognized characters. With the mature nature of the games and the big ideas and intricate storylines- it’s a perfect fit for a museum.

At 12 noon an March 17th (that’s this Saturday for those in NA) there’ll be a panel discussion for interested parties. Kindly point your browser over to http://www.americanart.si.edu/calendar/lectures/archive/2012/gamefest/kojima/ to check it out… and, uh, don’t mind that oddly out of place cardboard box over in the corner.

Defend some Dungeons on the Mac